Felisa had been divorced for five years. She and her ex-husband were on good terms and split custody of their 12 and 15-year-olds, alternating weeks. Her dream was to travel the world during the weeks she wasn’t responsible for her children.

Her FI number was calculated based on what worked in her given present scenario. As an executive for a non-profit, there were always pressures to do more with less; the frugal lessons of that job served her well in her personal life and she reached FI 2017 and quit her job to travel in February 2018.

The First Trip; So Close

Her first big post-FI trip was planned. A seven day, 1980’s themed Caribbean cruise was her splurge of choice, complete with Rick Springfield!

Just two weeks into being FI, she left on a Friday afternoon for her trip. Her ex-husband Wes, was supposed to pick up the kids from her home that night around dinnertime. The kids, home alone, were at her house waiting for their Dad to show up.

At first, he was just a little late which was very common for him so no one was worried. However, as the evening wore on with no word from him, her mind began to go through all the worst case scenarios. The kids were calmer. They said not to worry. Dad was just late and they were going to go to bed.

She didn’t sleep at all that night, replaying every thought. Was he mad at her? Did he just fall asleep on the couch? Was this spite for taking a big vacation? Finally, around 6 am, she called her ex-sister in law Kim and asked if someone could drive to his house to see if he was there.

Shortly after she got the call from Kim that there was an accident. Wes’ girlfriend was driving the car and had lost control. The car flipped and Wes was killed on impact. The girlfriend survived but was at the ICU. Felisa abandoned her cruise plans, quite literally from the dock, and went home to be with their children.

His computer and cell phone were destroyed in the accident. Like most of us, he kept all his personal and business info on his laptop, and there was no accessing any of it. He had a Will, but it had not been updated since the divorce. In the State of Florida, once divorced, Felisa was not entitled to anything in the Will. She was listed as the executor but since the Will hadn’t been updated since the divorce that was no longer legally binding.

His Will listed Felisa as the executor first, which the court wouldn’t allow. His mother, second, who had since passed. And Finally, his Dad, who had just had a stroke and was not capable of such a task.

Eventually, his sister Kim was legally appointed but that took a court order and a long time. Plus, Kim really didn’t want to do it. She is a trained five-star chef but had no clue how to manage an estate, which included 12 rental properties. So, Felisa ended up mentoring her as much as the courts would allow.

In the meantime, she couldn’t so much as pay her kids’ cell phone bills, which were in his name, or transfer their numbers over to a new plan in her name. She had to petition the court to get anything accomplished.

Actionable tip: Make sure your Will lists people who really can handle the level of work involved, not necessarily just a close relative.

There was also the practical side of dealing with his cluster of an estate. Wes was a highly ambitious man who had a lot of bigger better deals going on. He had multiple rental properties but everything was leveraged and he didn’t have any life insurance.

The tenants in the 12 different properties thought they just won the lottery. There was no one to collect rent since all Wes’ bank accounts were frozen. Rent checks couldn’t be deposited and bills could not be paid. There was also no one to evict the tenants, or even legally able to sell the property.

It took a title search and a lot of digging just to find out what properties he owned and what the mortgage payments were. He kept all of this type of information on his laptop, but remember, his laptop was destroyed in the accident.

In reality, it took months to find all the properties and evict all of the tenants in preparation for sale. In the meantime, they weren’t collecting rent and the mortgages were starting to go past due with penalties and fees. There wasn’t any significant cash in the estate to do any repairs so they had to sell “as is” (including with tenants living in the homes) which means only investors would buy them. Considering all of this, the homes sold for much less than market value.

So all that paper wealth just vanished with the reduced price, lawyer fees, real estate fees, taxes, etc. There will be little, if anything, left when the dust settles.

Actionable tip: To get your estate in order you will need life insurance, a Will, possibly a Trust, and a legacy binder. Having these items in place will mean that your loved ones will be cared for upon your death.

And what about the children? The children are now listed as beneficiaries, should any profits appear when it is all done. Also, an interesting point is that both children are minors, so Felisa had to hire her own lawyer to set up a guardianship for the kids should there actually be any funds at the end.

If there is any money in the guardianship, Felisa can’t use it for anything related to “normal parenting responsibilities” like school or health insurance. Instead, it has to sit until each child turns 18 and then they get full access and can spend it however they like with no input from Mom.

What about car insurance? Shouldn’t there at least be some funds received since the girlfriend was charged with careless driving? In this case, they found out that the girlfriend only carried the minimum Personal Insurance Protection (PIP) insurance. PIP is an extension of car insurance that covers medical expenses and, in many cases, lost wages. It is often called “no-fault” coverage because its inherent comprehensiveness pays out claims agnostic of who is at fault in the accident. The girlfriend had no assets of her own, so there was nothing to sue for. The car insurance paid an insurance sum of $5,000 as a death benefit.

Related: Get The Best Price On Life Insurance with Policygenius

She now hashe kids full-time. Prior to the accident, she had diligently planned, calculated, looked at all of the risks, and feeling comfortable, had pulled the FI trigger. Her budget was based on 50-50 custody. She had planned on less food, electricity, water, less everything.

But, with one event, her life and her children’s life was turned upside down. She’d lived on about $50,000 a year, and now she is estimating about $70,000. Things like paying for camps, braces, school fees, all the things kids need, was now double. She has filed to receive Social Security for the children, but it will not amount to much.

Slowly, she realized she had to grieve the loss of her established freedom and the guilt associated with wanting such freedom. She had to go back into full-time Mom mode. As parents, we all have our regular “me time” and we nourish our souls when we can snag some. She no longer had Wes to shoulder the responsibilities of parenthood. Another surprise was needing her own time to grieve this man who, at one time, she had shared her life with.

Everything changed, but her Financial Independence played a huge role in the aftermath to come. She considers herself very grateful to have been FI at the time of the accident. She had to help her children through this horrific time. Not having to go to work every day has allowed her to be present with her kids day after day. It allows her to be there for them as they grieve the loss of their dad.

Because of Financial Independence, there was nothing that took priority over her children.

For now, she is soaking up the time with her kids until they fly the nest in six-plus years. After that, her journey will likely resume as originally planned. But that is not a 100% guarantee, as you never know. She has readjusted the budget knowing that the full burden is now hers.

What has she learned from all of this? Life will throw you curve-balls with or without FI. But FI gives you the flexibility and competitive edge to not only survive but thrive.

Her advice is to go for FI, but keep learning about the spiderwebs that can obstruct, derail, and detour your carefully laid plans. In hindsight, she is glad to be in the position she is in, considering the chain of events. “Life will happen, good and bad, you don’t always know what will be around the corner.” If you are going to pull the trigger on FI, have a plan B and C.

Even if things don’t go exactly as you planned (and they won’t) living the FI lifestyle will always be a benefit and will allow you to roll with the punches much more easily.

What could have made this situation more bearable? 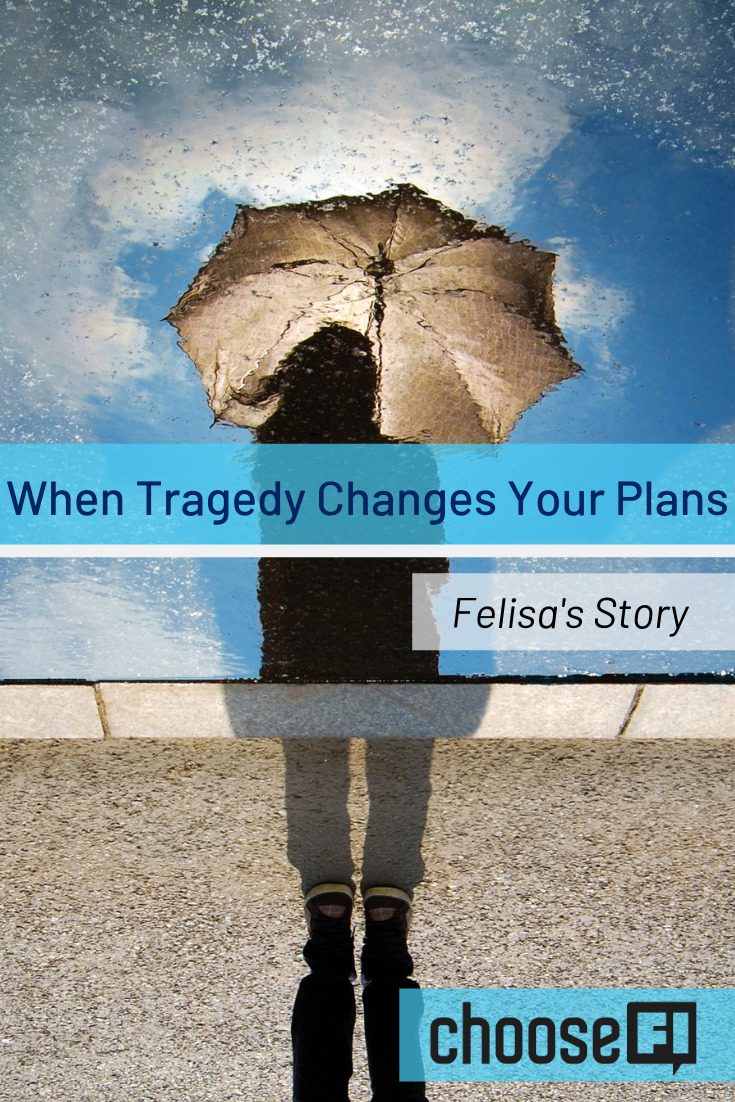