A Prison Cell, A Lost Decade, And Recovering My Life

I was released from prison after ten years of incarceration in 2012. I walked into prison as a 21-year-old-kid who had made a mistake with drugs. Ten years later, I was a 31-year-old man who felt like ten years had disappeared in a blink of an eye as I walked out into the prison parking lot to see my family again. 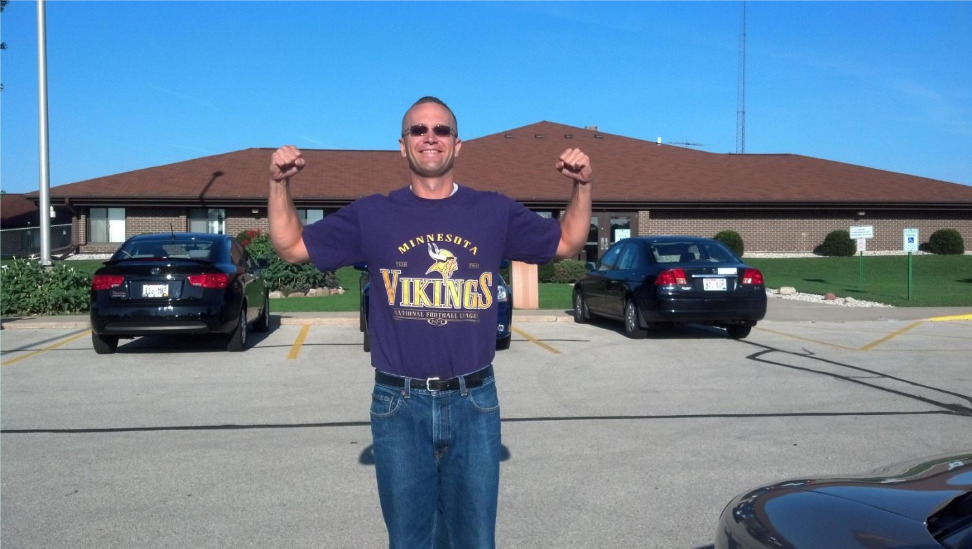 (This photo was taken of me on the morning I was released from prison. A link to the story that led me to prison will be published at the end of this article.)

As I got into the car with my family and began the four-hour drive home to Minnesota, flashbacks of my journey through prison flashed in my imagination. Memories of tiny cells made of concrete blocks, surrounded by razor wire fences that had been my reality for so long, were now just a figment of my imagination.

It was like arriving back on earth after living on a different planet for a decade. I realized I was standing on the edge of an entirely new life now.

I tried to act cool and calm, but I was intensely nervous about this new beginning. I felt like I was thrust into this new world without any of the life skills or experience an average 31-year-old man has.

I had forgotten how to drive a car, write emails, or manage a bank account. I had never held a job that paid more than a high-school wage, and I’d never lived on my own outside of my parent’s basement, college dorm room, or correctional institution.

But as I looked out the windows, and watched the free world that I hadn’t seen in a decade pass us, I had an incredible sense of hope. I had planned for this moment for ten straight years. My brain exploded with ideas and plans like a firework show at the last night of a carnival. I was ready to take my shot and create my second chance at life.

In prison, I had learned to view every experience as an opportunity that would either make you stronger or weaker. My prison years became my mental boot camp that I used to push myself to become smarter, stronger, and better. My ultimate goal every day in prison was this: I didn’t want to get mentally, spiritually, or physically beaten by all the time I had to spend in there.

I created a mental game to help me prepare for my eventual release while I was in prison. I called it: “Strategy Games.”

I wanted to be prepared for every situation so that I could make the best decision no matter what was happening to me in the real world.

I didn’t want to screw my second chance up. I had waited so long and worked so hard for it. Fear swirled around in my head like ghosts. Had I prepared enough? Could I make it? Was success even possible for a person like me?

It was finally my time to find out. I didn’t realize it at the time, but I had built a secret weapon while in prison that was about to be more powerful than any of the road-blocks in my way.

That secret weapon was this: A go-getter mentality.

While reading about other great leaders in prison, I had stumbled onto the idea that everything amazing in life comes from developing a “go-getter” mindset.

A go-getter was someone who was willing to go out into the world and get what they wanted out of life, rather than accept the path they’d been given. Go-getters used assertiveness, determination, and discipline to achieve their dreams.

Thinking like a go-getter was a revolutionary mindset for me. In my pre-prison life, I had always lived in a “reactionary mindset.”

Rather than working for the goals I wanted, I felt like I was always reacting to the things that happened to me. But in prison, I finally had the time to think about what I wanted. I decided my best option for my future was to go on a fearless mission to achieve everything I wanted.

If I wanted a better life, I’d have to do the things to get it.

Related: How Hitting Rock Bottom Put Me On The Path To Financial Independence

I planned to start slow and then begin rising to the top. I accepted the fact that I wouldn’t have the skills or experiences employers would want on my first day out of prison.

But I believed I had other skills that employers would love after they had a chance to work with me. These skills were: honesty, toughness, ingenuity, perseverance, and a profound refusal to quit no matter how hard the goal seemed. I was going to bite onto my dreams like a pit-bull and not give up no matter what.

I got my first job stacking magazines on big-box-store shelves for $9 an hour. I checked the box on the application that I was a felon, but I was never asked about it at the interview.

I finished my senior year in college, and along the way, I made friendships and alliances with every successful person I met because I knew I’d be the average of the five people I spent the most time with.

By my second year out of prison, the skills I did have started to get noticed just like I’d planned. Successful people wanted to help me and gave me great advice.

One piece of advice was: You should start your own business because you have natural sales skills. So at the end of my second year of prison, I started my first business selling apparel and promotional products (SWAG) to companies while still living in my parent’s basement.

I started by going door to door meeting local buyers. In my first six months, I sold $10,000 worth of product. I almost gave up because I couldn’t live off the small profit I’d made. But I kept going.

In my second six months, I sold $180,000 worth of product. But rather than inflating my lifestyle and buying a new car and fancy clothes, I kept it bare-bones and lived as I had in prison. When you realize you don’t need a lot of fancy things to be happy, you can save an extreme amount of money.

In my fourth year out of prison, I was amazed that I had amassed a $150,000 net-worth by just going and getting the life I wanted to live.

Once I realized how much a go-getting-mindset changed my life, I doubled-down on it. I sold more and saved more.

I got married to a frugal woman, and we bought a house together. We learned how to invest our extra cash into index funds and bought an investment property together.

Since my money achievements were almost an accidental result of me living my best life, I decided to start writing about it. That’s how my blog, Wealth Well Done, was born.

I have a memory that happened when I was ten years old that forever changed my views on how work and happiness can be intertwined.

I grew up in a home that was next to an empty lot of woods. Most of my childhood was spent building tree forts with friends in those woods. One summer, as we were finishing a new fort, I remember experiencing this revelation about myself: I liked the fun of building a fort more than I liked playing in a finished fort.

For me, the art of building was more enjoyable than the act of playing. That memory stuck with me as a significant clue about what ultimately makes me feel fulfilled and happy.

I love finding unique resources, ideas, and relationships, and then transforming these things into cool experiences and products. This clue to my personality leads me to believe that I’ll probably never quit building or working on projects I want to accomplish. I like the adventure of building cool things with cool people too much.

From my experience, being self-employed with a ton of money invested into cash-flowing assets is about as close to financial independence as you can get without being 100% FI.

When you’re self-employed, you don’t have a boss, commute, or schedule to drag you down or strangle your creativity. You wake up every morning and ask yourself: “What do I want to accomplish today?  What dream to I want to build and live today?” Your only boss is the voice of your soul telling you what you should do to make the world a better place.

That sounds like a job I don’t ever want to quit.

I’ve started three businesses in the last five years and they’ve all made money:

I’ve sold a million dollars worth of product through my sales company. My real-estate profits are $10K a year. My blog makes around $1,000 a year.

That’s why once I have a net worth of $500,000+ and my monthly expenses are $2,000 or less; I’ll consider myself virtually financially independent.

At that point, I’ll already have a ton of money in the bank to get me through rough stretches. If I need more money, I can start a new business like I am a kid building another tree fort in the woods again.

Prison didn’t define me. The things I learned defined me. Even if you are lost, you can find your way again. Forgive yourself. The impossible can become possible if you go out and create it.

You can read my full story of why I went to prison and how I survived it here. 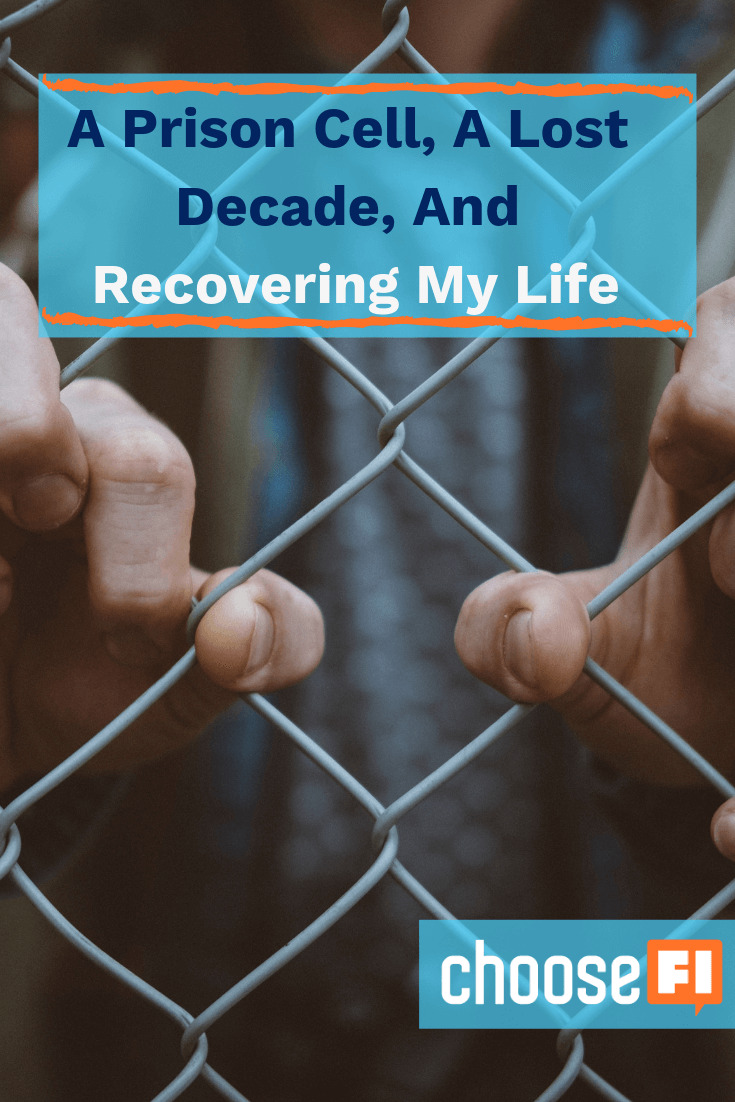