How This Couple Paid Off Their Mortgage In 506 Days

According to Jim Rohn, “We are an average of five people that we spend the most time with.” The older I get, the more that quote resonates with me. I’ve learned how to identify people that I want to learn from and be around and be influenced by, and those I do not. Nowadays, when I see FI characteristics in people, the gravitational pull does what it does naturally.

Introductions And A United Vision

Being intentional, as any motivational personality will tell you, is the key to getting what you want. With that in mind, we registered for The Legacy Journey class by Dave Ramsey to, hopefully, connect with some like-minded folks.

John and Niki were the only other students in this class, so we were able to absorb their journey through all that they shared during the seven weeks.

Through what they shared in class, and now about a year into our friendship, we know that they have been together over a decade, have a genuine love for one another, and they had a united vision for their future. They also love dogs. Bonus!

The Beginning. The Catalyst. The Plan.

As their story unfolded, they mentioned that it took them 506 days to pay off their mortgage. Five hundred and six days.

Common to everyone’s story, there had to be a catalyst to making change in their world. After all, they were “normal” like most everyone else, until they had a few realizations.

John had been experiencing some instability at work. In addition to the unrest that he was sensing, the minimums on his credit cards totaled $500 a month and he knew that he had to do something about it. Not being married yet, they sat down together and decided to reinvent their financial situation. Behavior change is what they needed, and change is what they agreed on. John’s debt was upwards of $30,000 and about $25,000 for Niki.

John is a side hustle guy. Because of his widening reputation of having an innate ability to fix or fabricate just about anything, even do canvas work to reconstruct convertible tops and so much more, opportunities to trade his time for presidents’ faces found him. When he wasn’t working his regular job, he was in the garage. He even turned down work periodically, he was that busy. His stuff is that good! It helps that because of the quality, he could charge a super great side hustle hourly wage.

As for Niki, her job had unlimited overtime and on-call, so she took advantage of those bonus work opportunities. She is a dynamo in the kitchen so she optimized every penny that came in as a home economics whiz. She is an Instant Pot master!

To celebrate the paying off of their individual debt loads, they took a trip to Colorado. On that trip, John stopped on a bridge over the Animas River and popped the question. After being together nine years at that time, Niki said “YES”. They were married four months later, which was 2014.

These two are fans of Irish culture, so they made their next goal a savings goal, and decided on a budget-friendly trip to Ireland. Three weeks were spent traveling the Irish countryside, loving Irish music, learning about the country, the people, the music, eating the food and more. Can you imagine the peace of mind that would take over your soul on a trip like that? I digress.

When One Goal Is Accomplished, What’s Next?

When they came back, they each had a paycheck just sitting in the bank account. Time to outline the next financial goals. It was clear: Pay off the house! For us non-geeks, it took a year and a half, but for the geeks, 506 days. They continued all of the work, in all of the ways, that had gotten them to this place. By applying that same attitude and work ethic, the mortgage was now gone, which was March 2017. In Dave Ramsey terms, they treated it as baby step 3B; if you could knock it out in two years or less, do it! They even kept contributing to their 401(k)s!

They made incremental goals for themselves on this $114,000 monster.

After paying off 25% of it, they would get tattoo wedding bands. Those tattoos ended up being free!!

After paying off 50% they would get a “new/used” Craigslist couch. How’s that for counterculture? Niki just couldn’t stand the idea of buying new when that money could go to the mortgage. Wisdom abounds!

They ended up not doing any celebrating at 75%, but when it was paid off, they threw a huge mortgage burning party that more than made up for what the monthly mortgage payment would have been. My hubby Alan and I didn’t know them at that time, but we would have liked to have been at that party! They hoped to be inspirational to others.

As for the actual nuts and bolts of paying off the mortgage, anytime they came across extra money, they would put it on the mortgage. They would make on average, six to ten extra mortgage payments on the principal every month. The tiniest, I mean tiniest, amounts of found or earned money would go into the bank and then on to the mortgage. They were crushing it.

There were three key things that led them to arrive at their destination:

People around them thought they were crazy with every decision observed. It got to the point where Niki simplified their decisions for others as a goal of remodeling their kitchen. “I hate my kitchen” ended up being the abbreviated reason to go nuts on their debt.  She does really hate her kitchen, and it is the next major purchase, and after that, John will be getting a large workshop in the backyard. But having the money to pay for it, is always the plan. So counterculture.

Even now, a year after meeting them, I pick my chin up off the floor after looking at their Excel spreadsheet. They averaged $223.26 paid off per day. They averaged $6,921.86 per month! I knew that these were two people stood out from the crowd in every way that was important. If I’m going to be an average of something, let these two be in my group!

Having the mortgage burning party was a good reward, but the more personal one was taking a second trip to Ireland earlier this year with double the budget of the first trip. Staying in castles and buying a whole lot of jewelry speaks to the valuist in all of us. Well done!

What The Future Holds

As for long-term goals, John wants to retire early, mainly for the purpose of his time to be his own; allowing him to work on any and all projects. Niki wants to keep working for a good long time, at least for now.  She loves what she does and as long as she is in a good environment and feels productive, she’ll keep at it. More travel is in their future, including Scotland, Cornwall, Wales, Canada, Nova Scotia and many more. You’ll get there, my friends!

John loves Thomas Edison‘s quote: “Opportunity is often missed by most people because it is dressed in overalls and looks like work.”

To find people like John and Niki, take a look at where you can find a ChooseFI Local Group near you. 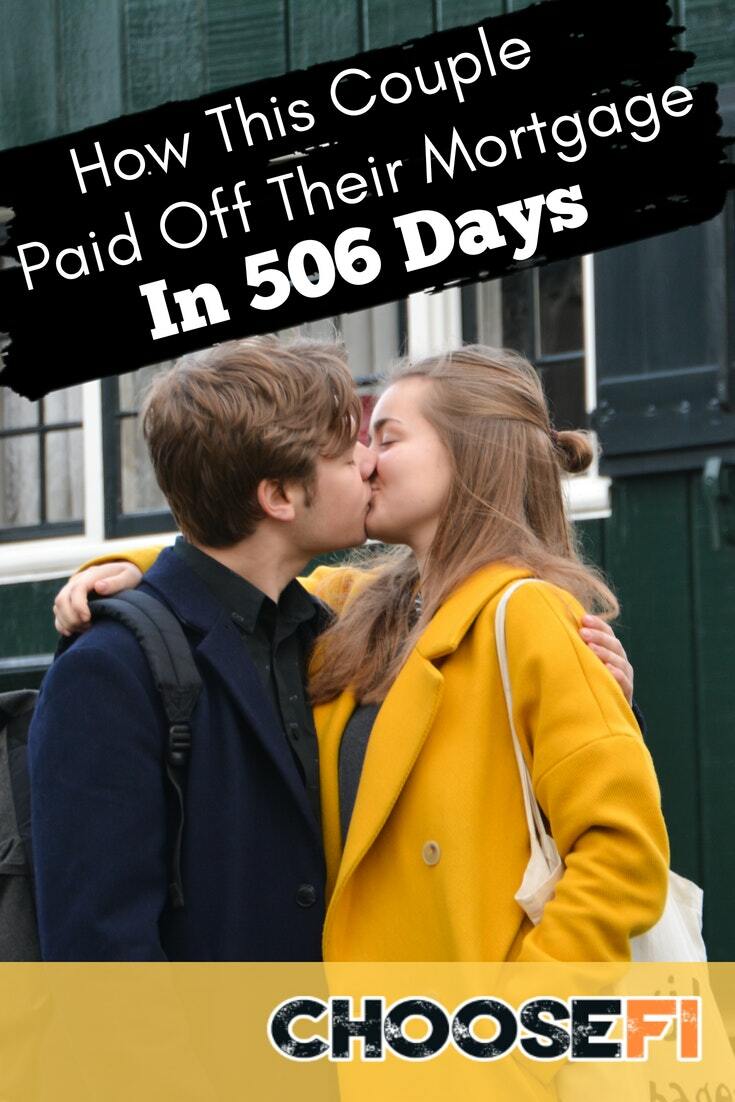