How This Reluctant Spouse Got On Board With FI

Granted, if you’re reading this, you are already a FI geek. However, your other half may not be cut from the same cloth. I, (Vicki) was the last one on board with making some changes to what we were doing, so I wanted to share a bit of our journey.

Though I wasn’t a “Reluctant Spouse,” I was a “Clueless Spouse.” Yet, in the past few years, I’ve mastered the Dave Ramsey program and more recently, have learned about FI. Also, the FIRE concept particularly interests me since my salary with the State of AZ has been the same since 2007. I’m ready for something new!

Alan and I are several chapters into our financial journey, but those early chapters were pretty scary for both of us. We grew up in the ’70s and learned a lot of life lessons, particularly about work–and that’s where the lessons stopped. We both came from small-town Nebraska. My parents had the mindset that you just spend as little as possible, except for cigarettes. Alan and his two older siblings were raised by a single mom and he is astonished today as to how she did it on so very little.

If we had known what FI was back then, we would be in a completely different place.

Our combined story started quite regular. Roughly twenty years ago, we met, got married, and moved away all within a year and a half. As time went on, we hummed along through life, both of us had very average jobs but we felt like we were “adulting” before it was cool.

We even had a brand new Dodge Dakota sitting in the driveway and made the “investment” of a timeshare. We must be doing okay, so society tells us. We had struggles with infertility trying to start a family but eventually were blessed with one daughter. Time continued to pass. We kept asking ourselves “What can we do better to handle money?” and “How can we make more progress?”

We had about $7,000 in savings at this point in our marriage which was thirteen years in. That didn’t seem like a whole lot for all the work we had done and all the thriftiness we had practiced. After all, what do you get when you mix Goodwill shopping with new truck payments? We didn’t take glamorous vacations. We didn’t go out to eat very much. We knew what net worth was and we knew that it was a stagnant concept for us.

Related: How To Get Your Spouse On Board With FI

One day, Alan got to talking to his friend Steve about Steve’s family’s journey. Their child had just been diagnosed with muscular dystrophy. What a blow! Living paycheck to paycheck was not a good place to be, considering this new challenge in their life.

They had started this process called the Total Money Makeover and had received the Financial Peace home study kit as a gift. Steve raved about the progress they were making. “Progress,” well shucks, that’s what we were after!

Alan came home with the Total Money Makeover DVDs that Steve had let him borrow. My Love Language is Quality Time, so when he suggested we throw these DVDs in and see what it was all about, I was game. I was all up for snuggling with some popcorn with my sweetie and learn something. Movie night will never be the same. I think he even ordered a pizza. Twist my arm!

Related: Bridging The Gap Between Dave Ramsey And The FIRE Community

And so it began, we came to find out over the nine-week course that there were some pretty good ideas presented in the material. Dave is a dynamic teacher and we were willing to learn. Heck, what we were doing wasn’t getting us anywhere, might as well change the recipe. I had a fog about me at this point, but luckily, Alan is the one making things happen.

I just had to show up at the budget meeting and negotiate. Consider it done!

According to Dave’s teaching, anything above $1,000 should be taken out of savings and thrown at the debt snowball. $6,000 knocked off several of our smaller debts. You’re kidding me? With that single action, I felt “progress” on steroids. Now we only have $1,000 in the bank, but if something happens, we can cashflow it. OK, that makes sense.

Amazingly, it took us 13 1/2 months to pay off the $37,000 we had in debt. I couldn’t believe what a difference this method made. It was the measurable, visible, tangible movement of the needle we had been looking for.

Related: Debt Snowball Vs Debt Avalanche: Does It Really Matter?

We finished Baby Step two in April 2012–and in July 2018 we paid off our home. There is something that changes in your spirit when that happens. It is indescribable; and so doable. As the FI community says, now on to Baby Steps eight, nine and 10.

We are still learning. Amazingly (don’t tell Dave), we applied for a credit card in order to jumpstart some travel. So we’re going to need this community of like-minded smart people to help us zero in on the Pillars of FI and open up all that comes from the freedom we’ve yearned for and now savor!

Getting Your Spouse On Board

In my novice-to-natural path, I’d suggest a few things to convince your “reluctant spouse” to join the FI journey:

Negotiate the Cash: When we went to a limited amount of “blow money,” Alan had to be flexible with me. Limits? I don’t need no stinking limits! We slowly reduced that category as he was able to chart every time we saw the debt go down. Seeing those numbers made me realize that I could spend even less, and I did. He lost the battle to win the war.

FPU is a good place to start: Again, assuming that one of you is slow to come to the table, this was a great way to simply get things under control. Keeping the car out of the ditch is the place to start. Then we’ll worry about what comes next. The Steps are foolproof, so even the most nonchalant or uptight spouse can at least see the plan.

Go back to the beginning: I love my spouse, I would do anything for Alan. In those big and little actions and words, (pay attention!) true teamwork is solidified. If you have a spouse who is trying to guide you, let them. That doesn’t just mean the one with the head knowledge. It means both of you. In your mind, your heart, and your soul breathe that in for a minute–show them patience and understanding and truly try to see what they see. After all, you would do anything for them. Actions and words are deposits. Make a habit of making lots and lots of love deposits and you can’t help but become an unstoppable team!

Were you the reluctant spouse? What helped you get on board with FI? 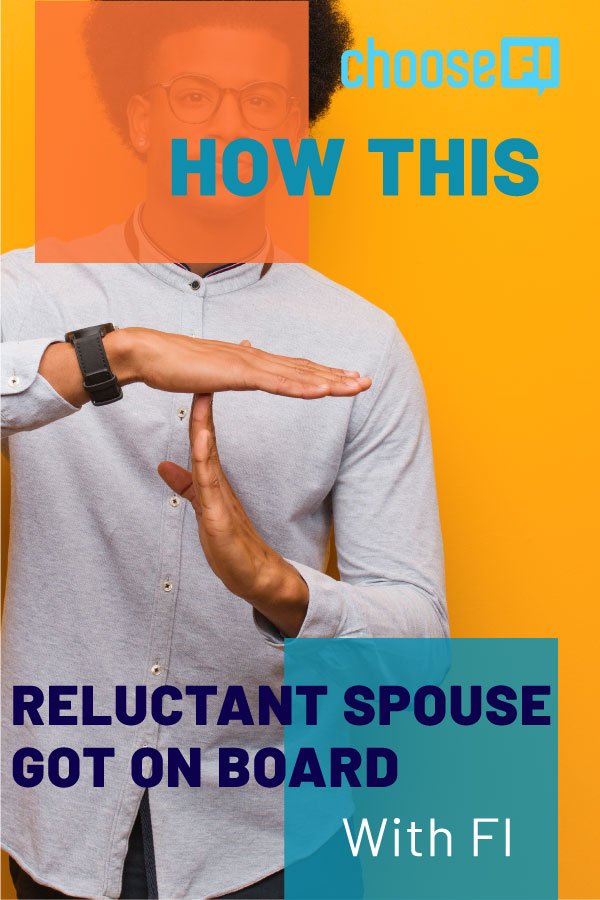