How To Get Your Kids On The FI Bandwagon

The benefits of a FI lifestyle don’t click for most people until a certain age. Some get the message early on, but it’s usually not until we reach our 30’s, 40’s, or even 50’s that we start questioning the cycle of consumerism and debt that comprises most people’s financial habits.

That’s why it can be so hard to get your kids on board. They just don’t have the life experience to see the benefits of living lean, saving up and building a stable future. It’s up to you to convince them, which is easier said than done.

If your kids are struggling to understand the lifestyle changes necessary to achieve FI, here are a few ways to show them the light.

Stick to Your Principles

When Jackie Cummings Koski, CEPF® of Money Letters got divorced, she decided to start working towards financial independence. Her daughter was nine at the time, old enough to feel the impact of Koski’s changing financial habits.

The worst moment was when her daughter turned 16 and wanted a new car. Koski had always promised to match whatever her daughter saved, as long as she paid for big purchases with cash instead of financing.

“Apparently after talking to some of her friends, she thought it was terribly unfair of me to make her pay for the car with part of her own money. She also thought it was unfair that she wasn’t getting a new car,” Koski said. “She said that her friends’ parents paid for their cars and they got new ones.”

Eventually, her daughter got a seven-year-old loaded Volkswagen Jetta. This ended up being the first of many moments where she coveted–but didn’t receive–the pricier items her friends had. Before heading off to college, Koski’s daughter thanked her for teaching those valuable lessons.

“Now in her early 20s and on her own, I see all these wonderful sparks of FI in her,” Koski said. “It’s so cool to see those characteristics and know that she is going to be second generation FI for sure!”

Lesson: You can’t expect your kids to jump on the FIRE bandwagon immediately. It may take years or even decades before they accept your lessons. Be patient and don’t get frustrated if they keep whining. As long as you stick to your guns, they’ll see your point of view eventually.

Related: How To Open A Roth IRA For Kids And Teach Your Kid About FI

Show Them the Benefits

Amy Rutherford and her husband Tim of GoWithLess used to think they were frugal. They bought clothes at Goodwill, ordered water instead of alcohol at restaurants and bought their daughter’s clothes at Target.

One day, Amy and Tim realized they could retire within a year if they cut back on their spending, so they sold their 6,000 square-foot home and bought a two-bedroom townhouse. Their daughter was in eighth grade at the time.

“In our former home, we would yell as loud as we could to her room and she couldn’t hear us, because she was a ‘wing’ away from us,” Amy said.

The move from lavish living to financial independence has been drastic, but the Rutherfords managed to keep some semblance of normal for their daughter. They didn’t downgrade her activities, like sending her to an overnight camp.

They worked hard to make sure she mostly saw the benefits rather than the downsides of FIRE. Tim used to travel for work constantly, but now he’s retired and home all the time. Amy said the smaller house makes their home feel cozier, so they spend more time together as a family.

“She doesn’t seem bothered in the slightest that we downsized,” Amy said. “If anything, she seems to act like it’s a positive.”

Lesson: Not every sacrifice will make your child upset.  If you downgrade to achieve financial independence faster, show them how this move will help you in the long run. If you need to move to a smaller home, find one near a park so your son or daughter can play nearby.

Related: When And Why Your Child Should Open A Roth IRA

Other Tips for Raising FI Kids

When you’re raising a kid while striving for financial independence, your child might notice that your lifestyle is different. They might wonder why their classmates have bigger houses, newer cars, and the latest iPhone.

It’s hard for kids to be different from their peers, especially for reasons they don’t yet understand. Every child wants to fit in, so sticking out will always present challenges. When you’re a FIRE parent raising kids, you have to clearly and consistently explain the benefits of your lifestyle.

For example, tell them how you’re saving for their college education so they don’t have to take out student loans. Talk about how you can afford overseas vacations because you’re not spending as much on your mortgage. It helps to be specific. If it’s appropriate, share your budget, your saving rate and how long you have left until retirement. Make your kids get excited about the goals you’ve set for your family.

“Build up the positive experiences you’re going to start having, such as family game nights, evening walks and more time at the local park,” said Mindy Jensen of 1500 Days. “Your children do not want things, they want your time.”

It might take a while for them to understand, maybe even until they’re out of the house. Just be patient and stay the course. If you’re lucky, your child will turn out like Koski’s–a second-generation FI devotee. 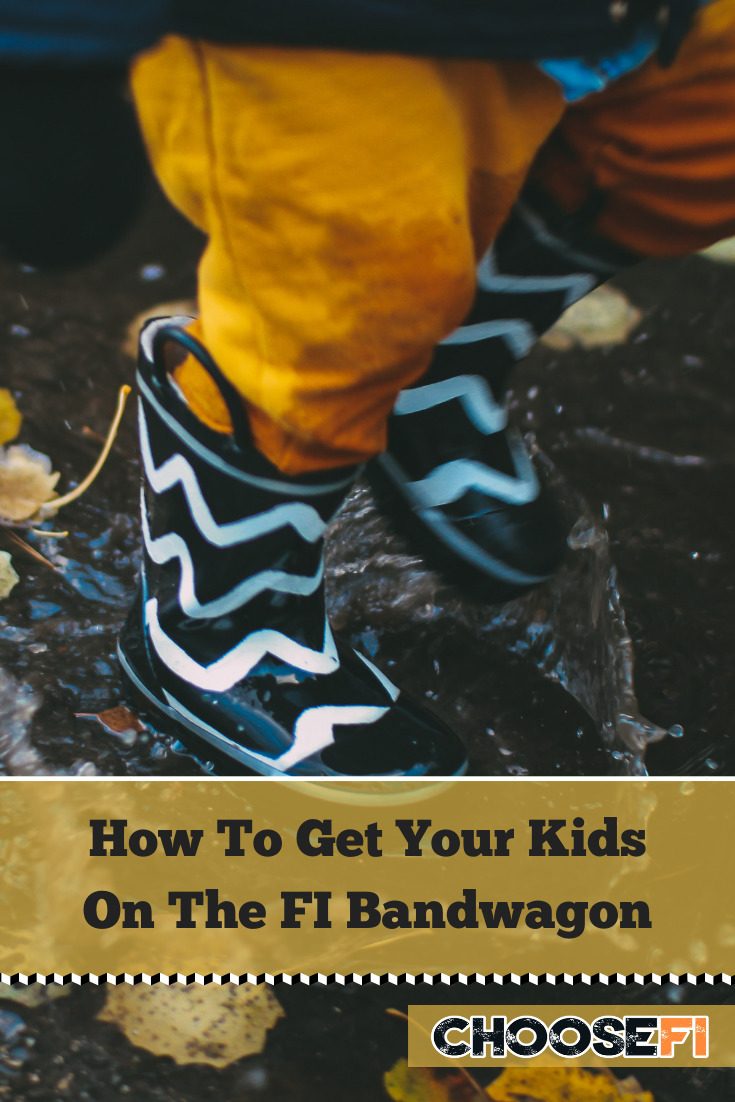 In this episode; global funds, it’s not doctrine, index funds, VTSAX, what is in index funds, and the opposite of active investing.

In this episode: VTSAX funds, bonds, cap-weighted funds, finding your ballasts, staying the course, and the simple path to wealth.