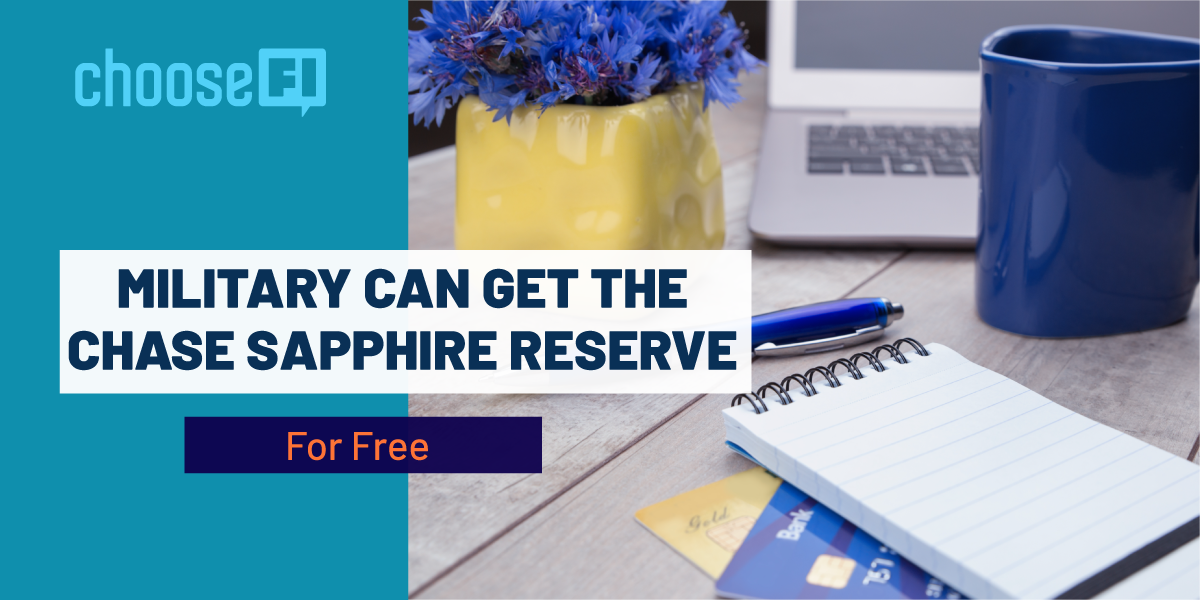 Military Can Get the Chase Sapphire Reserve For Free

Want a step-by-step guide to earning travel rewards in the military?

Active duty military can now get the most popular Chase personal travel rewards card, the Chase Sapphire Reserve for free!

The game changed dramatically in 2017 when Congress implemented additional provisions to the Military Lending Act (MLA). Because of MLA, Chase is waiving the annual fees for members of the military and their dependents.  This doesn't just apply to a select few cards, it includes the most valuable products in Chase's portfolio of personal credit cards, like the Chase Sapphire Reserve.

Don't worry, when Chase waives the fees under MLA for military members, the card’s benefits remain exactly the same.  Avoid confusion. There is another Sapphire card, the Chase Sapphire Preferred Card. It’s a great card as well, and it may sometimes offer a higher sign-up bonus. However, the Chase Sapphire Preferred Card earns points at a somewhat lower rate, the points aren’t worth quite as much, and it does not include a travel credit.

Chase also restricts the number of Sapphire cards you can have at any time to one, so it’s not possible to get both cards. Additionally, a Sapphire product sign up bonus can only be earned every 48 months.

See our full review of the Chase Sapphire Reserve here.

Other Top Chase Cards For Military

Chase United Club Card
The next Chase personal card most people recommend is the United Explorer Card, which has a $95 annual fee. However, the Chase United Club card with a $450 annual fee offers a few more benefits to the cardholder, such as a United Club membership and a higher earnings rate (1.5 miles per $1 on all purchases).

Since the annual fee is no longer a factor because of MLA, military members can apply for either card. Though the Chase United Club card may seem like a slam dunk with its United Club membership, it may be a better move to apply for the United Explorer Card.

Of the three Southwest personal cards, the Southwest Rapid Rewards Priority Credit Card has the highest annual fee of $149. The perks associated with this Southwest card are more valuable than the other Southwest cards. It includes:

Chase limits Southwest personal cards to one, so it’s best to go with whichever one is offering the best combination of Rapids Rewards points and perks when you apply. You can always request an upgrade to the Priority card after your first anniversary to receive the higher annual benefits.

Please note, Chase does not apply MLA benefits to their business credit cards.

Besides the points and miles active duty service members can earn with Chase cards, the other benefits these cards offer can make travel easier and more comfortable.

Traveling can be a stressful experience. Between crowded gates and expensive airport food, a long layover can feel like torture. Having access to an airport lounge makes the entire ordeal much more pleasant and less expensive.

Not only are lounges are a quiet refuge from the hustle and bustle of the terminal, but they offer food and drinks, free WiFi, and plenty of outlets for charging devices. A military family can save a bundle just being able to grab meals or snacks between flights. Some lounges even have playrooms for kids, complete with books, toys, and video games.

Chase cards like the Chase Sapphire Reserve include statement credits to cover the application costs for expedited screening. Every four years, the account is eligible for a TSA or Global Entry statement credit.

When you have TSA Pre-Check, you can skip the long lines at security. Those with TSA Pre-Check can keep their shoes, belts, and jackets on, and won't need to remove items from their carry-on bags, making the entire line move more quickly.

For active-duty military, the Common Access Card (CAC) number can be used for the Known Travel Number (KTN), so a TSA Pre-Check credit card benefit may be used for another family member. Kids 12 and under may go through the TSA Pre-Check lanes with a parent, making traveling with little ones easier. However, the CAC does not give military service members access to Global Entry, the trusted traveler program that provides expedited entry into the US. When reentering the United States from overseas, Global Entry recipients visit a kiosk at Customs and Immigration, avoiding the regular lines, and complete the process with far less time and effort.

When considering which program to apply for, you should know that Global Entry recipients also receive a KTN. This makes Global Entry the better option as it includes all the benefits of both programs. However, everyone going through Global Entry is required to be enrolled, regardless of age, so children will need to enroll as well. Luckily, there are plenty of cards currently offering this benefit, so there are opportunities for the entire family to enroll and skip the lines at the airport.

Related: The Global Entry Program: Everything You Need To Know

Chase And The Military Lending Act

Chase has the most liberal interpretation of the law but is only waiving annual fees for credit cards opened after the MLA effective date of Oct 3, 2017. Annual fees on credit cards opened prior to that date will not qualify. Instead, the account has to be closed before you can reapply. The new account will qualify for MLA benefits.

There have been some data points suggesting some have been successful when asking Chase to apply MLA to their credit cards opened prior to Oct 3, 2017. Those appear to be rare exceptions, but it never hurts to ask! For many military members, Chase automatically applies MLA benefits. Eligibility confirmation may be triggered when “Military” is selected as the source of income during the application process. You should receive a letter informing you that MLA benefits have been applied without having made the request. If not, you can always call Chase using the number on the back of your card and request MLA benefits. Chase will not waive fees

under SCRA unless the credit card was opened prior to entering active duty. Reserve and National Guard service members can make the SCRA request if activated. Likewise, they may apply for a Chase card while activated for more than 30 days and have the fees waived under MLA.

What Exactly Is The Military Lending Act?

As with other military benefits, a covered borrower’s eligibility is confirmed through the Defense Enrollment Eligibility Reporting System (DEERS), so be sure all dependents are in DEERS before applying for a new credit card.

The protections MLA provides include a 36% APR cap on interest incurred while on active duty, but the law factors in fees and other charges when calculating that cap. Here’s where things get a little murky. Bonafide fees can be excluded. That begs the question, what is, and what isn’t a bonafide fee?

Several years ago, Chase implemented a rule regarding the number of new credit card accounts an applicant can have recently opened. It’s not found in the terms and conditions of the card agreements, nor is it publically published anywhere. Those in the travel rewards game commonly refer to it as 5/24.

An applicant who has opened three personal credit cards in the past 24 months is said to be at 3/24. Once an applicant has opened five personal credit cards in the past 24 months, they are at 5/24 and will no longer be approved for any Chase credit cards. It’s important to note that most business cards are not reported to the consumer credit bureaus and will not count against your 5/24 status as long as the business account is in good standing. The exceptions are Capital One and Discover. Both issuers report business account activity to the consumer credit bureaus.

What About Other Credit Card Companies?

Credit companies have had to interpret MLA for themselves and decide how to implement it for their products. Unfortunately, not all have come to the same conclusion regarding whether an annual fee constitutes a bonafide fee.

American Express has been waiving the annual fees for military under SCRA on its product line up for quite some time.  As a result, they've built up a loyal military following, particularly with its top cards, like The Platinum Card from American Express.

For service members just starting out with travel rewards; resist the urge to apply for The Platinum Card from American Express. While The Platinum Card from American Express is an incredible and valuable card, Chase also has an amazing collection of cards. Additionally, Chase’s 5/24 rule means that everyone, military included, should focus on applying for Chase cards first.

Capital One waives annual fees under SCRA, but only if when opened prior to entering active duty. The request can be made online here or by calling 1-866-516-4023.

Capital One doesn’t have a huge portfolio of credit cards, and that’s okay since they limit you to holding just two of their personal credit cards. Capital One® Venture® Rewards Credit Card miles can be redeemed for flights, car rentals, hotels, ride-sharing apps, cruises or transferred to travel partners.

Getting annual fees waived with Citi under MLA is a mixed bag. At first it Citi was waiving annual fees, then they began denying requests, and more recent reports have surfaced that annual fees were being waived again. Unfortunately, we can’t say for certain if you will be successful or not, so it’s something to keep in mind when opening Citi cards.

Call to make the request with Citi. Their military specialists can be reached at 877-804-1082 in the US and 605-335-2222 for overseas collect calls. Make sure you ask for MLA benefits. As with Chase, Citi will not waive fees under SCRA unless the credit card was opened prior to entering active duty.

Barclaycard will apply MLA benefits to their credit cards, but consider the annual fee to be a bonafide fee, so they will charge it.

Chase offers a fantastic suite of rewards cards that are quite popular and highly valued. So much so that Chase had to devise and implement application restrictions, like its 5/24 rule to slow the wave of applications. The enormously successful launch of the Chase Sapphire Reserve and its easy-to-use $300 annual travel credit also drove the issuer to restrict Sapphire sign-up bonuses to once every 48 months.

Though Chase is now waiving annual fees under MLA, it doesn't bypass any of the application rules. As a result, a Chase card opening strategy requires careful planning. Military members should maximize their credit card opportunities with Chase prior to moving on to American Express.