From Welfare To Wealthy: Sabrina’s Story

It was 2008 when 27-year-old Sabrina found herself a divorced, single mom of twin three-year-old girls and a four-year-old son.

Despite working a full-time job and a part-time job, she still qualified for low-income housing, food stamps, and subsidized child care. And despite her struggles and limited time she still managed to go back to school.

Soon after graduating, and a few years of experience, she landed a job which almost doubled her income. Now that she had some breathing room in her budget she looked at taking her $85,000 in student loans out of hardship deferral.

At this point, she learned a shocking, and not uncommon lesson that there is no sympathy when it comes to hardship deferral. The loans had been accruing interest this whole time! She had no idea.

In 2015, she moved from Pennsylvania back home to Colorado. She soon connected with Dave, a good friend from high school. Dave had a five-year-old son and a four-bedroom house he had purchased through a short sale. Sabrina and her kids moved in not long after she and Dave started dating. Having been around the block a few times, they established a lease agreement. He was the owner, and she (and her kids) were the tenants. All the expenses are portioned out, like roommates.

The agreement works out wonderfully for Dave too. He often makes double or triple mortgage payments now that both of their expenses having been cut in half by splitting the bills.

With six people living in a four-bedroom house, you’d think it would be full to the rafters. She and Dave in one bedroom, the twin girls in a second, the boys in a third. This allows them to Airbnb the fourth! They started out slowly by just renting it out on Fridays and Saturdays, but once they got the feel for how it all worked they opened up the schedule. It now brings in up to $2000 a month! They have plans to finish the basement which will earn even more income! They want to supplement Dave’s income completely so he can retire.

Airbnb is a huge moneymaker for them and they have a goal of paying off the house within the next couple of years. Plus, they get to hang out with people from all over the world. When the kids go visit the grandparents over the summer, they Airbnb and the kids’ rooms and give them a portion of the profit. It has been a learning experience, but so worth it on so many levels!

When the basement remodel is done they’ll hit a 65% savings rate and will hit their FI number in 5-6 years. In true FI fashion, they both will have the time to do what they are passionate about, such as traveling, exploring hobbies, and volunteering with organizations near to their hearts. Getting to the point where they have the option to walk away from Corporate America is where she’ll find true freedom.

They also put their monthly expenses on credit cards with accruing travel points and as a result, have had two round-trip tickets to Maui for free. They are planning to take advantage of the Southwest companion pass next year to fund more free travel. And as an Airbnb superhost, they get perks and benefits including booking lodging cheaper. It’s all about optimizing.

“To fast-track FI, we cannot do things like the culture says to do, we have to find an opening for possibilities and make them happen.” says Sabrina

It all started with free information she was willing to absorb. In 2016, Dave Ramsey’s Total money makeover was the catalyst and from there, the financial learning, specific to Financial Independence opened up wide for her. The nourishing information is there for the taking, and she has taken in as much as she could. Podcasts such as Bigger Pockets, ChooseFI, Mad Fienist, Millenial Money Man, and Mr. Money Mustache have made the impossible possible. Hope is an addiction. The content keeps her motivated, even on hard weeks.

Related: Starting Late But Retiring Rich: The Story Of Stephen And Becky

There are times when she just wanted to let loose and be irresponsible for a change. However, instead of indulging in something that would hit her with the dopamine we all crave, she–sigh–makes yet another huge student loan payment.

Reading about how people have transitioned from the grind to doing what they love keeps her dream of freedom alive. Having options equals freedom. It’s not as hard as some people think. Financial Independence is not the sacrifice people perceive it to be. It is merely a re-framing of what is important. You can entertain at home, skip the expensive restaurants, be frugal and still have a damn good life. Entertaining at home is way better anyway!

She changed jobs a year ago and is now working at Charles Schwab in a position that has more room for growth. The financial package is way better and they even have an HSA and a 5% match! Now that she has low expenses and a higher income, she gets to ask a question that never entered her mind a decade ago. “What should I do with all this money?!”

Answer:  Pay off the Student Loans!

Income-based repayment plans may seem like a good idea, but your assigned payment often won’t cover the interest. Sabrina was making $200 payments and that was not even touching the principle. The student loans are her only debt. But they seemed insurmountable.

She decided to attack them full force. She needed these loans out of her life. First, she itemized everything. No dollar would be spent unless strictly necessary. Everything was cut in one way or another! By the end of 2019, the student loans for this single mother of three will be gone!

Sabrina wants a different path for her children.

Each of her kids have been learning how to avoid the path Mom took. They have savings accounts of their own, and grandparents have contributed.

Together they are researching ways to make school cost less; from scholarships and working, getting an associate’s degree at a community college and then transferring to a four-year university, or certificates or trade school can all be options. They are also looking into taking college classes in high school or maybe joining the military.

All of these things will help, but in the end, it’s really on the individual. All of the kids “get it” on some level. If you eliminate debt as an option, you will find a way. Her kids saw mom and all the work it takes to go to college. No doubt she is going to guide them with the wisdom she’s gained.

Sabrina could have easily given up, but she got herself into her situation and promised to get herself out. She is almost there! It is hard, but worth it. You get to decide which direction to go and how fast.

Visit Sabrina and Dave on their blog Live Well, Love Much, where they share hacks to increase income and cut expenses in a variety of ways. 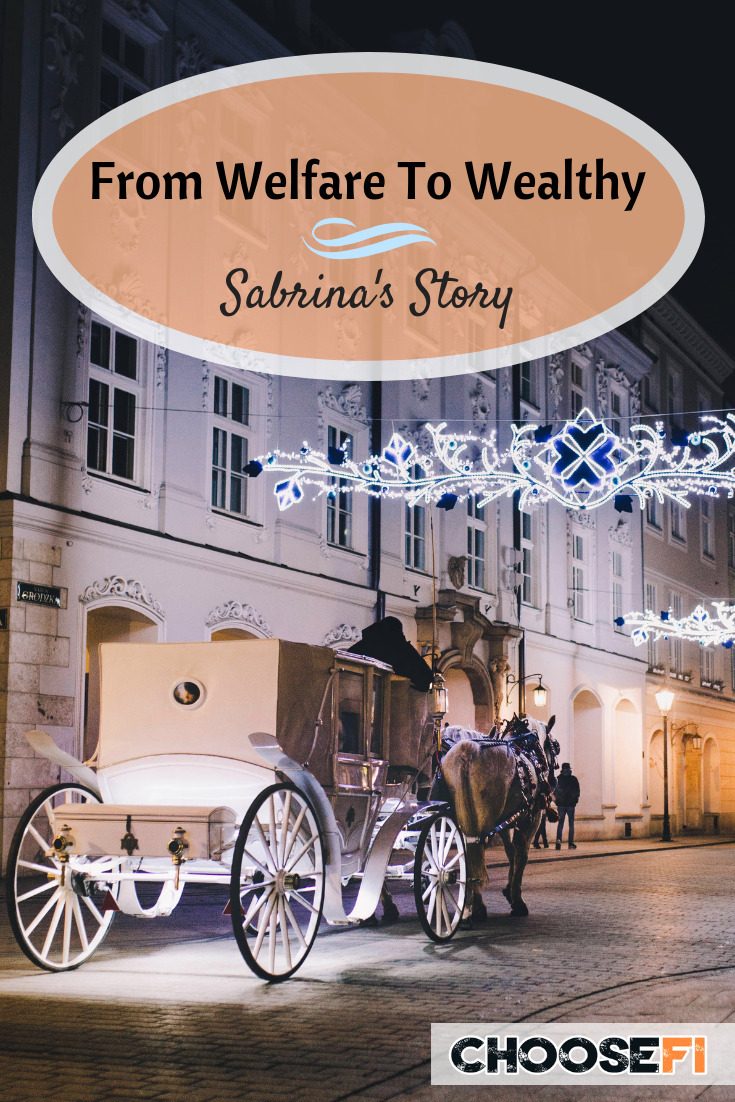