Starting Late But Retiring Rich: The Story Of Stephen And Becky

Becky and Stephen were latecomers to the ChooseFI way of life. Their situation is pretty rosy now with Stephen getting ready to retire at the end of December this year at the age of 63. At that time, he and wife Becky, 62, will uproot from their home in Houston, Texas to be closer to their kids in the Colorado/New Mexico area. With high property taxes in Texas, a Geoarbitrage scenario looks pretty good.

However, there was a time when such a dream, retiring to Colorado in their early 60’s, did not even exist.

The Past: Young, Dumb, and Broke

After graduating college and getting well-paying jobs the couple began their adult life like most people. They bought the biggest house they could afford, along with all the toys and material goods their salaries could buy. The debt mounted but they were not concerned. After all, they wouldn’t qualify for the loan if they couldn’t afford it, right?

After about eight years of living the typical American lifestyle, Becky decided to become a stay at home mom. This reduced their expenses somewhat as they were no longer paying for full-time daycare or commuting expenses. To fill the gap, Becky started a side hustle teaching computer classes three or four times a month. (She did this for several years until babies two and three came along.)

Around the time Becky quit her job, Stephen was fed up with the corporate world and started his own home-based business.

Income from his business wasn’t exactly stable, but it provided what they needed to survive. The sacrifice of income was worth the extra time Stephen got to spend with this family, and to this day, he doesn’t regret the decision.

Things were cruising along until two clients decided not to pay Stephen. Since they had no emergency fund this lost income was a huge burden on the family.

If You Can’t Eat It, We’re Not Buying It:

The situation was untenable. The credit card bills were mounting and Becky was frightened. She could not see a way out. The hole was too deep. She soon realized that just to exist, they were digging a deeper hole by the day. This put some stress on their marriage, as you can imagine. She admits to not being very supportive or helpful to the man who earned the only income. The man who, despite the wolf being at their door, put food on the table and the roof over their heads.

With three teenagers, they were staring college tuition in the face. They hadn’t saved for college when times were good. In fact, they hadn’t saved for anything. There was no light at the end of the tunnel. Finally, at the age of 50, Stephen closed the business and got a salaried job at a small architectural firm. Salary sweet salary!

About that time, they were introduced to Dave Ramsey. Following the Baby Steps, they paid off the business debt, credit card debt, and personal debt in 2006. Everything except the house was paid off. Fresh start! The mortgage was done in 2012!

Finding Dave Ramsey was key to starting the financial train heading in the right direction. Their kids joked that they “drank the Kool-Aid.” Following Financial Peace University principles and facilitating FPU for a few years gave Stephen and Becky the peace that they would survive, but they were still lacking the vision to thrive.

In 2008, Stephen landed a new job at a firm in Houston that had a better salary and the savings rate really started to climb. In May of 2017, their oldest son told them about the ChooseFI podcast. They were hooked. Stephen and Becky binge listened to Brad and Jonathan starting with Episode 1. The Pillars of FI and travel rewards really piqued their interest.

They listened to all sorts of Financial Independence podcasts and read blogs including Fritz at The Retirement Manifesto. JL Collins audiobook The Simple Path to Wealth was another favorite. In the continued learning process, they realized that they needed to move their investments because the fees were killing them! Tony Robbins book, Unshakable also spoke volumes in regard to paying as little in fees as possible.

The only problem was the existing investment advisor was a friend. We all know how that goes. It took a few months to build up the courage, but eventually, the newly empowered couple decided that they needed to do the smart thing. They broke up with their advisor and moved everything to Vanguard. Today, they are 95% in VTSAX. It has been a year since all that changed and there are no regrets about their breakup.

Stephen and Becky’s kids witnessed the about-face in their financial situations and were able to take some valuable lessons with them into the real world. They are proud and thrilled that all three children are very financially stable, seeing that no one has boomeranged, nor asked for money.

Related: How To Be Thankful For Your Finances (No Matter What Stage You’re At)

An Unexpected Impact With Millennials:

With three kids in college, Stephen and Becky were familiar with the goings-on of the college crowd. They saw the disturbing trend of rising college loan debt in these kid’s futures. They wanted the kids to know how easily student loans could add up and how devastating the debt could be for years, if not decades to come.

The future student debt of this age group weighed on Becky and Stephen. With the help of some friends who had a huge home and a pool, they hosted a weekend financial retreat. Friday night through Sunday morning a small, but tight-knit group of young adults went through the first four Financial Peace University videos and skimmed over the remaining lessons.

There were ten college kids and one high school senior. They drilled in the basics. Here it is years later and she keeps up with several kids from the group. It’s evident that their intervention created a turning point for what would have been bad early decisions. They didn’t know it at the time but their son-in-law was part of that group!

When their own children got married, Stephen and Becky gave each couple a specific dollar amount to use for the wedding. They encouraged each couple to create a budget for the wedding, work together on the planning and anything they didn’t spend, they could keep. This “one-time” gift took away the stress, and as a result, they took on more of a coaching role rather than being involved in the daily details! They suggested the money be placed into their first joint checking account. This was an exercise in working a budget together before they got married.

The Future: Old, Smart, And Wealthy!

Nearing the truly empty nest/retirement chapter, they hope to start teaching a Finance 101 class. While they’ve had the opportunity to mentor folks of any age, they really have a heart for young adults and want to help educate youth on what being wealthy means, as opposed to “looking wealthy”.

Because of their changes, even later in life, they are able to do the things they want, even if they cost a bit of money. Now, they both drive race cars, Becky loves quilting, they go snow skiing when they want and are planning on doing some slow travel. One bucket list item that they have already started enjoying is to rent a vacation home for a week for the whole family to enjoy.

Check out Becky’s interview on the podcast.

Words of Wisdom from Late Bloomers: 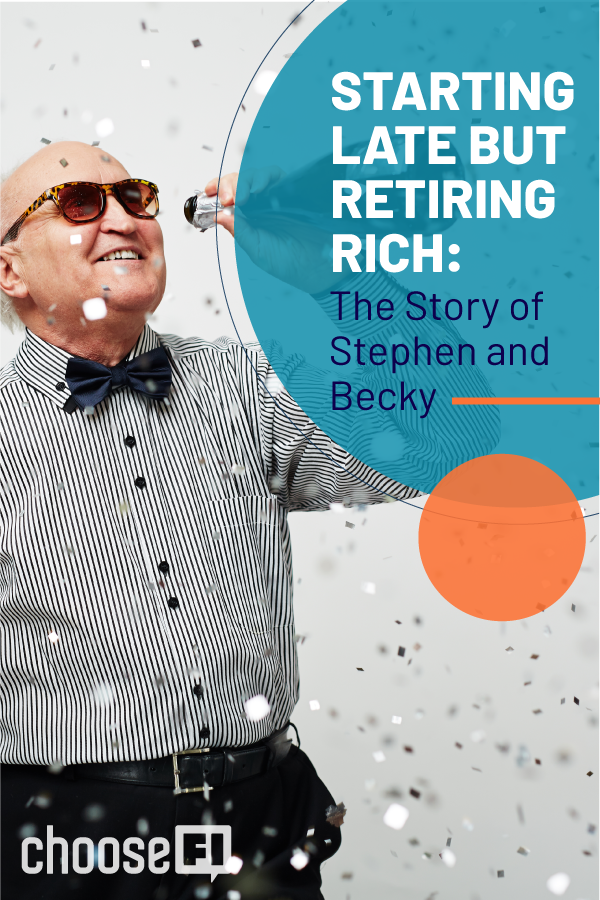