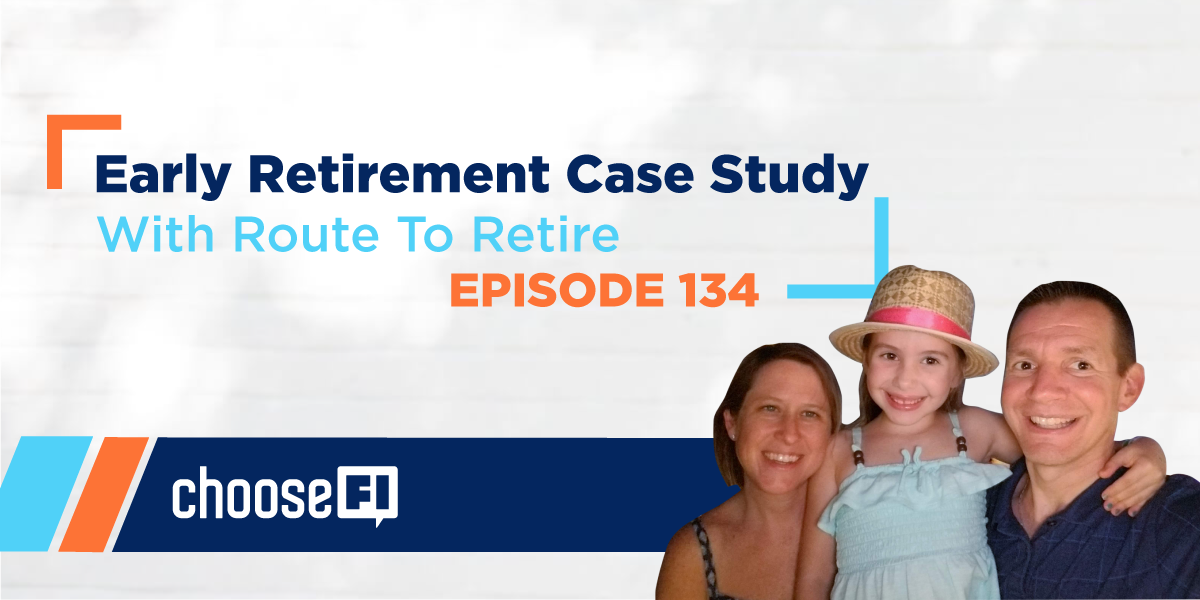 Brad and Jonathan talk with Jim from Route To Retire about life after retirement and geo-arbitrage.

The Path To Early Retirement

Focusing on the nuts and bolts of becoming Financially Independent can easily consume your field of vision. However, many of us forget to think about what happens when you actually “RE.”

Many of us lose sight of the fact that the path to Financial Independence for most,  for the vast majority of people that reach financial independence, is simple. It is not always easy but it is a simple, replicable process of growing the gap between earnings and spending. And then essentially using that to buy your freedom.

The process can be as simple, or difficult, as you make it. You do not need to have the next million dollar idea to reach FI. Simply focusing on increasing your savings rate could take you to retirement.

Jim from Route To Retire has successfully made his way to early retirement.  Here he shares his path to FI and how he adjusted to the new lifestyle of retirement.

Although Jim claims that he did not do everything right on his path, he was still able to hit FIRE at a relatively young age.

20 years ago, Jim was working as a store manager for Walmart. He almost went to Bentonville, Arkansas to pursue a career with Walmart but ultimately decided retail was not for him.

Instead, he took a job at a small company while he was still in school. While working part-time for this company, he started out with a salary of $25,000 per year. Jim stayed with this company for his entire 20-year career, but he would not necessarily recommend that today.

I think if you are looking to make a higher income, I think nowadays, job hopping is the best way to do it.

Fortunately, Jim was treated well by his company. He moved up through the growing company for 20 years. At one point, he felt it was time to make a change and told his boss that he was moving to Arizona. But he was enticed to stay with a management position and twice the salary which brought his income to around $75,000. By the time he left the company, he was earning just over $100,000.

While Jim was at the company, it was growing into a larger operation. This growth provided the opportunity for Jim to grow his salary throughout his career at the company.

Towards the end of his journey to retiring early, he found that the position had gone stale. Although he was loyal to his boss, he did not want to stay at the job any longer.

Missteps Along The Way

Although Jim was a natural saver as a kid, his college lifestyle changed that. He wanted to be the guy that bought everyone dinner, so he did. Spending like that led to around $30,000 in credit card debt.

The credit card debt was bad, but he did not realize the full extent of the financial crisis he was in until he happened upon Quicken 98 software. The software was a free version that he had entered his information into on a whim. Once he put in his information, he realized that he was in deep debt.

Quicken 98 provided a wake-up call for Jim. He took the advice of the computer's software program to dig himself out of debt. It was a difficult journey to debt-free, but since he was living at home and was only a mile from his workplace it was a manageable situation.

Once Jim had paid off his debt, he decided to stay on the path of saving. He was wary about using credit cards at all, so he was able to easily stay out of consumer debt. He had not found the FI community, but he did start saving more.

You do not have to do all of the right things as long as you keep going in the right direction.

Most of his savings went into his 401k which accumulated around $700,000 by the time of this retirement. Jim says that he was not optimizing his investments but he was working towards building his net worth.

After attending a Robert Kiyosaki seminar, he realized that there were other income streams besides his W-2. With that, he decided to buy a rental property and create a stream of income. Even though it did not go perfectly, it was a good experiment in wealth building.

Eventually, Jim found the FI community through Retire By 40. Before this, Jim did not even think of early retirement as an option but his eyes were opened.

I felt like I wasn't getting there fast enough… I started looking at different ideas. What if we moved to somewhere with a lower cost of living? And I started even thinking about looking at foreign countries. If we're going to move, why not take a look at places that might be considered a paradise?!

At some point on their way to early retirement, Jim thought about moving to an area with a lower cost of living. Although his wife thought it was a joke at first, she eventually agreed to move to Panama after a recon mission.

The Reality Of Early Retirement

On December 31, 2018, Jim retired. In the summer of 2018, Jim gave his boss ample notice about his plans to leave the company. Unfortunately, his boss did not take the news well. The boss either thought that Jim was crazy or that it was a ploy to get a raise. However, Jim was completely serious.

As Jim's retirement date approached, it was clear that it would be a somewhat awkward departure. His boss declined to throw the traditional retirement party that every other retiring employee received. Eventually, his boss admitted that he felt that Jim wasn't really retiring. He told Jim that Jim would be working somewhere because that is just the reality of the world.

Many of Jim's coworkers were happy and excited for him. A few were even interested in how they could make retiring early a reality for themselves.

Week One Of Retirement

The first week of retirement was more like a vacation than a normal week. Jim's daughter was still on winter break, so Jim just enjoyed spending time with his family.

It felt like it was a staycation. Many of us imagine that retirement will feel like a permanent staycation, but that is not the case.

For Jim, the second week of retirement was when reality hit. It was a struggle to find a real routine and he had a sinking feeling that he wasn't getting things done. He couldn't finish his to-do lists. He couldn't sleep.

I had thought, for whatever reason, I'm going to retire and BOOM! Everything's good. Suddenly I get more than 24 hours in a day and I can get everything done. And it didn't happen and I struggled big time with that.

The adjustment was really difficult. It took three or four weeks for Jim to settle into retirement. After that, it felt more like smooth sailing.

A Typical Day In Jim's Retirement

Now, Jim enjoys a routine that revolves around his daughter. In the mornings, he wakes up to get her ready for school. Once she has gone to school for the day, Jim exercises with his wife in the morning.

In the afternoon, he is usually working on the blog or doing bills. Once his daughter gets home, he can focus on her for the rest of the day.

Jim spends most of his time gearing up for their move to Panama. The family sold their home and is currently selling everything they can. The goal is to move to Panama with just two suitcases each.

Leaving his job was just step one in Jim's retirement plan. He plans to move his family to Panama this summer in pursuit of paradise and a lower cost of living in Boquete, Panama.

At the time, I didn't even know what geo-arbitrage was. This was just kind of a thought that I had for myself; How can we get what our net worth goal is? How can we bring that down, bring our expenses down? So I could quit my job even sooner.

Narrowing down the search from paradise with a lower cost of living to Boquete, Panama was not a simple process. After broaching the topic with his wife, Jim did hundreds of hours of research and amassed a legendary Trello board on where they should land.

In 2017, Jim and his family went on a vacation with the intentions of a recon mission to Panama. They drove around the country and chose to participate in local activities such as buying groceries and staying out of resort areas.

Boquete, Panama has a relatively large expat community of around 4,000 people in a city of 30,000. For now, Jim has chosen to give it a year before pursuing Panamanian citizenship. His family will try it out for a whole year which means they will need to follow tourist rules. Every 90 days they will need to leave the country for 30 days. If they like it, then they will apply for a permanent visa.

In terms of cost, the living expenses in Boquete will be around 60% of what they are in Cleveland, Ohio. However, that depends on what amenities you need in your life. If you need a mansion or a beachfront house, then your cost of living will be less affordable.

The couple will be homeschooling their young daughter during the transition. They hope to provide her with a unique cultural experience that will enrich her childhood.

Listen to the recap of this episode here.

The best way to connect with Jim is through his blog: Route To Retire. You can also find him on most social media @routetoretire

Favorite Life Hack: That I don't take life too seriously. When you treat people with respect, it can produce great things. Make an effort to treat everyone you interact with like a person.

Biggest Financial Mistake: When I went too far in the other direction and I became obsessed with Financial Independence. I wanted to reach my goal of retiring early so badly that I spent hours of each day to earn more income or look for ways to cut expenses. The irony is that I was not spending time with my family which is why I was pursuing FI in the first place. Paula Pant's podcast about cutting costs that do not really matter helped put things into perspective. It was so enlightening that I wrote a post about it, “Paula Pant Kicked Me Where It Hurts.”

The advice you would give your younger self: Start earlier, use the effects of compounding interest to your advantage. Also, consider rental properties as a way to build wealth.

Bonus! What purchase have you made over the last 12 months that has brought the most value to your life? A Chromebook that I purchased for personal use. And it came with a Google Home Mini. Bonus! I love it.