How To Start Biking To Work

“Nothing compares to the simple pleasure of riding a bike.” –John F. Kennedy

There aren’t many things that I get as much enjoyment out of as riding my bicycle to work. Ignoring the cost benefit for the moment, just imagine the efficiency of completing one task and simultaneously knocking three things off your “to-do” list at the same time:

Before we get to the nuts and bolts of how to get started biking to work, let’s talk about the question that I hear most often when the subject of biking to work comes up: “But will it help me lose weight?”

Can You Lose Weight by Biking to Work Every Day?

But if you are specifically hoping to lose weight by your bike ride to work, then there are two things that you’re going to want to help you succeed.

1. Track your caloric intake and output

It takes a caloric deficit of 3,500 calories in order to lose 1 pound of weight. Biking at a normal pace burns about 500 calories per hour.

But your caloric output isn’t the only thing to consider. If you start biking to work each day, there’s a good chance that you are going to feel more hungry throughout the day.

The bottom line: keeping track of your calories will be so important to your success.

If you want to find an app that could help you keep track of how many calories you’re consuming each day, try out MyFitnessPal. It’s a great app that will give you an estimated caloric count for just about any meal you can imagine.

Remember how I said that biking burns 500 calories per hour? That number applies to the typical leisurely pace that we think of with a typical “bike ride.”

But you can raise your caloric output exponentially by implementing High-Intensity Interval Training (HIIT).

Scientific studies have shown over and over again that even when biking (or running) the exact same distance, you will burn far more calories with the HIIT model than with normal steady-state biking.

I’ve used HIIT extensively and it helped me lose a lot of weight last year, but let me be clear–it’s exhausting. Oh, and one other thing–you’re going to sweat.

For these reasons, you may want to consider biking at a normal pace on your way to work, but then trying HIIT for your bike ride home.

How to Start Biking to Work

1. Find the Right Bike for Your Ride to Work.

Now you’re likely wondering how difficult it is to ride a bike to work without having a bike. Rest assured, it’s tough to pull off.

But in the off chance that you are considering biking to work and you don’t have a bike yet, don’t rush out and get one before you finish this article. It’ll help you narrow down your choices.

Hell, you might already have a bike and haven’t even realized how unrealistic it will be to ride it to work. Planning to ride your single speed beach cruiser 20 miles on a gravel trail won’t exactly be setting yourself up for long term success.

Also, if you don’t have an appropriate bike, don’t feel obligated to go out to REI or your local bike shop and drop $1,000 on a bike.

Search for used ones first. Craigslist, Facebook Marketplace, OfferUp, or the occasional yard sale will have plenty of options for you to metaphorically dip your toe in the waters of bike commuting.

The cost-benefit of this is obvious, and it’s also much easier to decide that a different type of bike or different options or accessories would suit you better. Then you can find exactly what you are looking for and sell the used bike at little to no loss.

2. Map Your Bike Ride to Work

Google Maps is my go-to for this option. It has a specific “biking” option that will take you on less crowded routes and trails that are available.

In addition to Google Maps, there are countless other apps and websites that you can use to map the safest, most efficient route. Feel free to try them out. Just don’t come whining to me when they lead you into a lake.

As mentioned before, your route can also be an important factor in picking out the appropriate bike.

Another important factor in this step is knowing the rules and laws in your area. You have the same responsibilities as car drivers.

It’s important to mention that riding your bike on the sidewalk is likely illegal (there are only a handful of places in the country that it’s permitted), and genuinely unsafe. So don’t plan your route around a sidewalk.

3. Get the Gear for Your Bike Ride to Work

It goes without saying since this is a financial blog, but don’t go overboard and spend $1,000 on accessories before your first ride. But the truth is that there are some bike gear accessories that are important for both your enjoyment and safety.

Visibility is key for bicycle safety.

If you are on the street at any point, at a minimum, you’ll need a rear light. This will obviously make you more visible to drivers, and thus lower your chances of an accident. That little reflector on the seat won’t cut it, so don’t go cheap here.

A front light is also highly suggested. You’ll want lights that flash or change in some way so that it draws more attention to your presence.

When I personally bike to work, I have three rear lights and two front lights. All the lights flash at different intervals, so they definitely attract attention. It’s almost comedic the number of lights I have, but I accumulated them over time.

Don’t feel obligated to go buy enough lights for a Christmas tree because some guy on the internet told you to. A reflective vest could be used in coordination with or, in lieu of, multiple lights; but you’ll still want at least one rear light regardless.

Other Gear You May Want For Your Bike Ride to Work

There are a couple of small items that you’ll want to carry with you on your ride. A spare tube, tire levers, a small pump, and your phone for backup. Uber has saved my wife and me from being stranded a couple times.

Now, depending on your profession, your ride, and your preferences, the gear that’ll make your life easier varies greatly. Here are some items though that you may want to consider:

4. Start Riding Your Bike to Work!

At some point, all the limiting beliefs you have need to be ignored, just for a few minutes, so that you can actually get started.

I completed my first ride to work on an early Sunday morning so there was less traffic and so I could gauge the route, and the time it would take me. My first ride took 23 minutes and it almost killed me. My next ride took 19 minutes, and it continued to drop, day after day, as my endurance and strength grew.

It will be tough at first, but if you don’t want to push as hard, just leave earlier and make it a leisurely ride.

“Don’t do nothing because you can’t do everything. Do something!” –Colleen Patrick-Goudreau

If your only way to work consists of a major highway or interstate, don’t skip out on riding because of that.

There are many ways you can structure your ride to best suit you.

Now that you have an easy step-by-step process laid out for you, there should be less apprehension and paralysis analysis about commuting on your bike. There will be a little leg work required (pun intended).

But after a little research and a little open-mindedness, I’m sure you could figure out a way to save yourself some money, make yourself happier, get in some exercise, and spend more time outdoors all at the same time.

Now, get out and ride.

James and Emily at Rethink The Rat Race are a young, married, child-free couple that write about frugality, travel, real-estate, and general life optimization. The two of them are planning to reach FIRE in 2020, which will be before they’re 30. Their hobbies include DIY projects around their house-hacking rentals, working out and riding bikes together, and spending time with their dog. Follow them at rethinktheratrace.com to get a peek inside their fast track to FI. 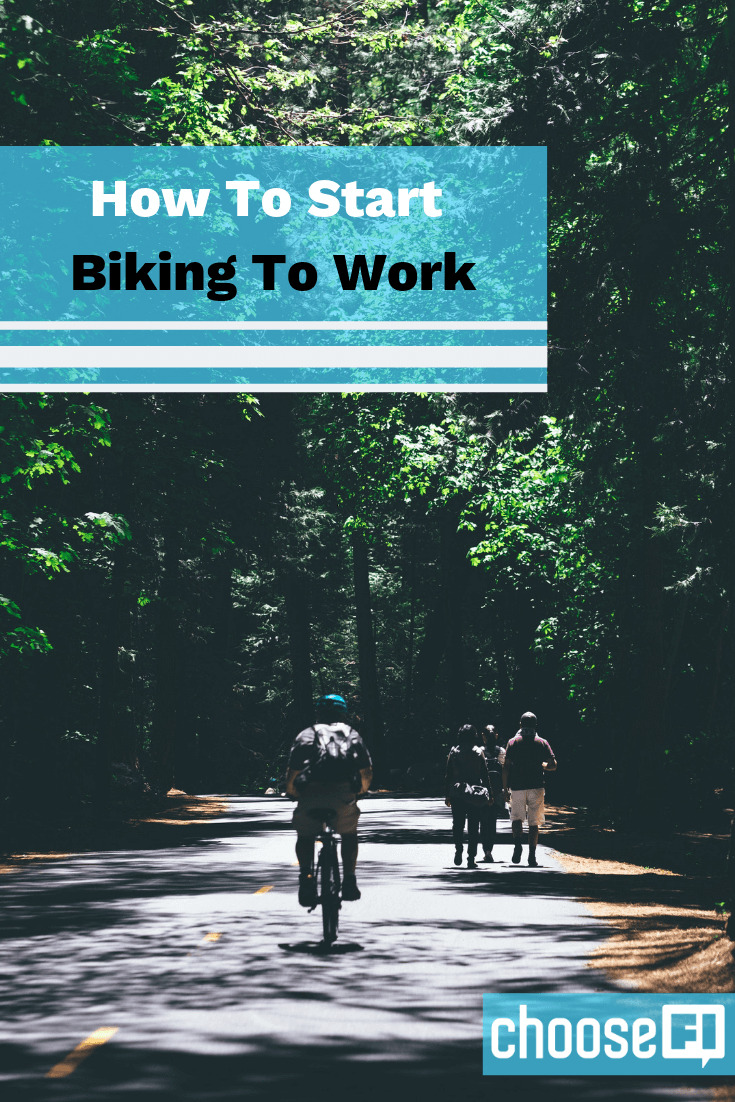