After immigrating to the US, MotherFier and FatherFier built a typical American life. They went to college, got good jobs, and found themselves deeply in debt.

It wasn’t until they were considering building a 4,000 sq ft custom home that they woke up to discover that their American Dream was really a nightmare.

Facing huge payments made them realize that this was not the life they wanted, so they started looking for alternatives. And found the FI community.

This is their story.

“Life, Liberty, And The Pursuit Of Stuff”

At the age of 20, MotherFier arrived in America in 2001 with $257 dollars in her pocket and no idea what to do next. Both she and her husband FatherFier individually immigrated to the United States as young adults pursuing the stereotypical world-wide “American Dream.”

They excitedly got on the hamster wheel and worked exceptionally hard. As they moved through their goals; (goals of consumption they later realized), “The American Dream” grew into a middle-class nightmare.

Whether you were born right here or immigrated, the pervasive culture impresses firmly into us to “keep up.” Buy the car, buy the house, and upgrade everything as soon as you can.

MotherFier got a full scholarship to attend a very prestigious private university in Texas. She worked two jobs and graduated with BA completely debt free!

She met her husband, FatherFier, in 2007 right before the big recession. He had come to America with $100 in his pocket and a desire to conquer the “American Dream.”

Both MotherFier and FatherFier had good jobs at Bank of America. But when the Great Recession hit, MotherFier was laid off. It was a blessing in disguise. Rather than look for a new job she decided to become a Physician Assistant and loves her job.

During her schooling, she gave birth to their first child just three days after her last rotation ended. She took her boards with a one-month-old at home and $148,000 in student loans.

For MotherFier, the American dream encompassed a new beginning, education, happy family, and overall blissful existence. All of this sounds pretty good, right? This is where she got it all wrong–she searched for happiness in the material world. Growing up in poverty, it was important to MotherFier to demonstrate to the rest of the world that she had it all figured out.

“How else will people know that I am ‘successful’ if I’m not putting my huge ‘perfect’ life on display, complete with oversized home, German car, and Venti Frappuccino?!”

FatherFier felt the same way. At one point, he actually stated out loud “We must have a mortgage and car payments and credit cards. No monthly payments equals a bad citizen!”

They lived in a modest 3-bedroom house which FatherFier had purchased two years after landing in this great country. After graduation and the birth of their second child, everyone around them kept telling them that their 1,700 sq ft house is too small for a growing family! So, it was time to “upgrade” from the “starter home” to the “forever home”.

They began house hunting and envisioning all the perfection that would appear in their lives if they just got that new home.

They dreamed of selling their existing home and building a custom 4,000 sq ft house.

During the process of house hunting, they decided to take a hard look at their financial situation. First things first, they calculated their net worth. With pencil in hand, the situation, and their future was even scarier than they had imagined. They both had great incomes, but the existing mortgage, massive car payments, medical bills, and overwhelming student loans left them with little room for much of anything else.

The reality of upgrading to a new and improved home with an even bigger payment suddenly didn’t seem so appealing.

Once you know, you can’t “unknow.” The realization of what they were planning on doing to themselves financially, went further than how much house they could “afford”.

All of a sudden, the stunning open concept house with the white kitchen looked like a prison rather than a paradise.

She was choking at this realization. They were about to fall into “The American Dream” trap again! While they were still bleeding money every month to pay the existing debt, they were contemplating upping the hemorrhaging by choice.

As a person of medicine, you want to bleed less, not more! Bleed for a shorter length of time, not intentionally make longer! Wouldn’t that be the definition of insanity?!

When the student is ready, the teachers (in the form of Jonathan and Brad) will appear.

MotherFier was desperate for something new. And in her research, she found the FI movement. She began living and breathing FI blogs and podcasts such as ChooseFI, Mr Money Mustache, and JL Collins. New goals, dreams, ambitions, and visions of the future emerged. These new ones are life-giving, instead of life-sucking. No more victim. It is time to take charge!

Finally, a movement that resists those American stereotypes!

She had found her people. She could not wait to share her new knowledge with FatherFier.

They sat down and talked for hours, discussing in depth how they wanted to live their own future.

They talked about what would do if they had no debt. They envisioned traveling both in the US and overseas. Exploring new places gives them true joy. They wanted experiences that bring them closer as a family, not a bigger house and fancier things.

They knew instantly that their dream had to be redefined. They no longer wished to be enslaved by the mortgage, student loan and car payments.

They had found their why.

“We trimmed the budget even more! Our $500 grocery expense was now $350 for a family of four. There was $0 budget for eating out and entertainment. We renegotiated our cell phone bill and canceled $8/month Netflix. We have decided to keep our cars, but these two will be the ones that will drive us into our retirement. Gifts have been almost non-existent.

We are now at the threshold of a very bold move which is to sell our current home which we hope to do in the Spring of 2019, if it is still a seller’s market.”

To crush their housing expense, they plan to move in with FatherFier’s mother. The positive equity they get from the sale of the house will be enough to pay off the entire student loan debt and both cars. They are so close to being debt free.

Suddenly, the opinions of others on how they need to live their lives did not matter.

They realized that consumerism is not what’s best for their family. The realization gained from the podcasts and the blogs convinced them that they have the power over their future, which gave them courage and determination. They are here in this wonderful country, grateful to have come across this future-oriented community. Their own definition of the American dream has always been right in front of them, and they’ve replaced stuff with happiness!

MotherFier is starting her own site, MyFILife, to tell her story. It launched in January 2019. Go check it out! 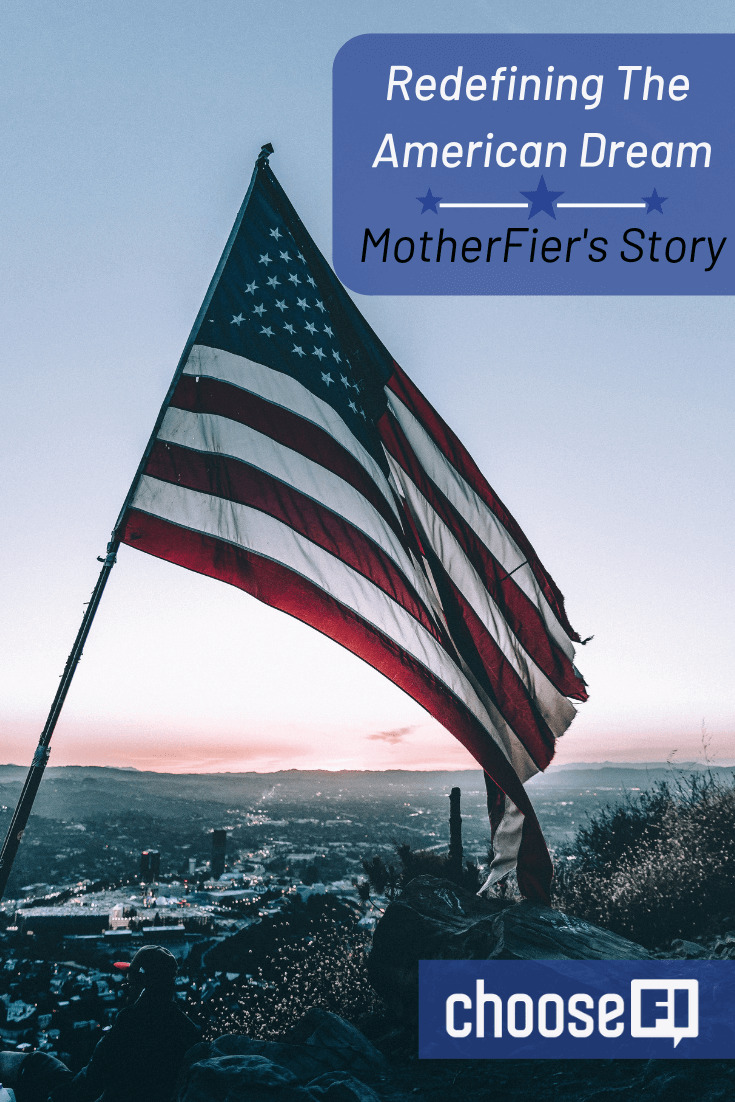 Life Optimization
What Do You Want To Be When You Grow Up? | Ep 383

Topics in this episode include lifestyle design, coast fi, slow fi, and aligning your interest with your career!