As a kid, comic books were a popular form of escape, and they still are today. In fact, the industry is thriving, as can be evidenced with a new superhero movie making its box office debut every time we turn around. Whether we get them as hand-drawn images or video form in the palm of our hands, they hook us. The adventures of Batman, Superman, The Hulk, Thor, and so many others allowed us to escape back then; and allow us that same sanctuary as an adult.
Comics?! What if that could be a career?

I had the pleasure of Skyping with Alex of Owensboro, Kentucky. He has been working to change plausible into possible. At the age of 26, his long-term dream of becoming a cartoonist is slowly coming to fruition. With a lot of work ahead of him, he is determined to be the man that crafts the whole thing, but for now, he’s the guy who creates the plots and the themes behind the stories.

To make a movie analogy; presently, he’s the guy who writes the screenplay. In today’s world, there are only four positions credited with creating a comic book; the writer, line artist, colorist, and letterer. Currently, he feels that is artwork is not at the level it should be, so he is taking community college art classes and practicing those creative muscles so that eventually he can mesh the two. It is just a matter of time until he will be the creator of the stories and images that take us to a whole other place. After all, escape in all of its forms, will never go out of style. Is anything as secure as the entertainment industry? I think not.

A Strong Foundation To Build On

Alex came from a family that had worked in construction for generations. In his words, “they eat, sleep, and breathe construction, and would probably do it for free.” Although he was glad about all he had learned in the family business all those years, Alex didn’t quite share the same passion.

As a child, he was bound to have a bright future. Looking back, he knew how to work at a very young age. He had a dream job of being a soccer referee. For a teenager–that’s the pinnacle right there! He also worked in a restaurant, as well as, the family business. Learning to work, and learning self-mastery at an early age, he didn’t have to be told to save some of what he made.

Saving came naturally for him. Along the way, he listened to his Grandpa and his Dad because they did well. His Grandpa retired around the age of 45. At that time, Grandpa had closed the construction company but kept the land company running and developed lots for Alex’s father and uncle to build on, through their own new company. Every generation has started its own company. He has business in his blood.

His Grandfather had arrived at FI as a concept before it was a “thing”. Alex watched with a keen eye and knew he wanted that financial stability for himself. Soon, he found podcasts that spoke to this topic of Financial Independence, and he immediately knew that FI was the concept that had been building in his heart and soul for so many years. With the help of ChooseFI, Mr. Money Mustache, Early Retirement Extreme, and Radical Personal Finance, he saw new clarity for the strategic moves he needed to make, personally and professionally.

In order to facilitate the transition from the construction industry into fulfilling his dreams, he began his side hustle. He’s devoting scheduled time to it; working strategically and efficiently. He’s learned that it is going to take some time to make the connections and arrive at his ultimate goal which is to write a graphic novel…several graphic novels in fact!

He is tethered to this dream with clarity and vision rarely seen in the general non-ChooseFI public. Now, here is where I didn’t just see a young guy talking on a screen–it was as if in slow motion–he paused and I saw the expression on his face. There was no hesitation, there was no angst, there was no self-doubt. As sure as any resolute statement has been summoned up before, he said “It will take work, and time, but I’m committed to making it happen.”

Mic drop. I wish that kind of certainty could be contagious!

Related: I Quit My Job! A Look At What’s Next

A Man On A Mission

He’s managed to keep his annual expenses down to between $13,000-$14,000 a year. He’s done some house hacking to keep expenses down. In homes he’s lived in over the years, he shared a good chunk of those expenses with two of his best friends. He’s got groceries under control as he buys in bulk and preps all at once. A well-established system keeps a thumb on the food budget. He’s also taken the Frugalwoods Uber Frugal Challenge. This is a man on a mission!

An Island Or A Village?

Since many of us on the journey to FI find ourselves on an island, I was curious if he’d found any like-minded people? A few friends from high school along with some family members truly “get it”. Good news is that he’s seriously going to start a ChooseFI Local Group in his rural area. So get ready Kentucky for a fresh movement in personal finance that is so counter-culture, it will make you go back to the basics and love every minute of it!

He’s stoked that his girlfriend is on the same page. As the smile beamed across his face, he recalled giving her The Millionaire Next Door by Tom Stanley in hopes that it would create a new dimension of their relationship, and it has! Just keep each other first, and that is going to be your first win every single day.

Being A Big Believer

To recap, goal number one is to do comics full-time. Being an entrepreneur, he quit his full-time job to start a freelance/independent contracting company to provide HERS Ratings (energy efficiency) to local builders. The profits cover his low expense lifestyle plus he’s able to put some into retirement savings. Being a freelancer, the structure has freed up so many hours of every week so that he can hustle the dream into reality!

Eventually, he wants to share his knowledge through a means such as a local innovation academy. He is a big believer that structured one-size-fits-all curriculum kills creativity. He wants to give back and inspire new ways to make things happen. Alex, you could do this on so many levels! Much later on, when the career transition is complete and well underway in its own right, he wants to bring his knowledge, experience, connections, and enthusiasm for this art niche to the next generation of comic creating enthusiasts.

The next time you see a Marvel movie in action, know that it all started with one person and one dream. And you are witnessing a glimpse of yet another iteration of that right here. Besides, I think FI should be made into a super-power! 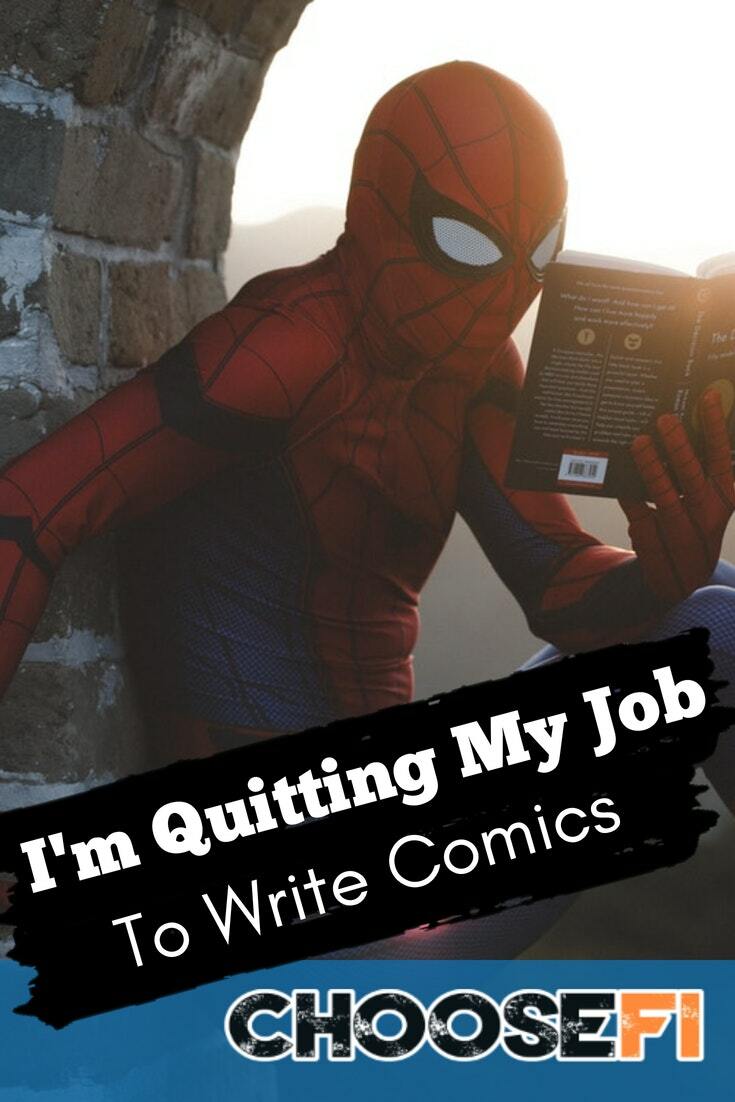