Pursuing FI From The Other Side Of The World

Holy crap. What the heck am I doing?

I was having a slight freak out moment. Actually, it wasn’t slight, and my internal monologue was a little more colorful than “crap” and “heck”. It was August 28, 2008, and I just landed at Incheon International Airport. Looking out the window of the plane, I couldn’t understand any of the building signs. I was 26 and seemingly ruining my resume by moving to Korea to teach preschool kids how to speak English.

This wasn’t the career path I had been following.

I’d had a job since I was 13, passing papers and working at a garden center before I could drive. I had a newish Jeep and a nice apartment, decked out with new furniture, new kitchen appliances, new work wardrobe. And I was going to all the functions and events around town that the other young professionals were attending.

But I was miserable.

I was bored out of my mind. And just couldn’t seem to keep up with the sales quotas that my boss had for me. I was upside down on a car, in an apartment that I couldn’t really afford. I had student loans and was starting to build credit card debt because I didn’t quite know how to manage the unstable income of a commission based job. To top it off, the day after I quit my job to move to Korea, my boss told me he’d “fire me” if I didn’t sign a non-compete agreement, pretty much closing all doors for me if it didn’t go well in Korea.

None of this is what I had dreamed of when I left my parent’s home to take on the world. I’d later realize that all my new coworkers in Korea were three to five years younger than me, doing a gap year and traveling the world before starting “real life”. It was a pretty depressing place to be, but I was hopeful for what was to come.

All I had were two suitcases, a carry-on and an overloaded backpack.

I had to decide what was important enough to take to the other side of the world with me. I sold my car and still owed money on it. Everything else got sold, given away, or put into storage. About a year later, I would even be sorting through that and throwing most of it away because my storage unit leaked, leaving a wet mildewed mess.

On the bright side, getting rid of all that junk ended up being one of the most freeing things I’d done. I had no furniture to upkeep, no yard to mow, no car to maintain. My new apartment in Korea was tiny, so cleaning took about 15-20 minutes on Saturday morning. Now I had lots of time to explore my new neighborhood!

Getting out of debt and living it up in Korea

I spent about five years getting myself out of debt. It really wasn’t that challenging though. The school I taught at provided my housing and a free lunch every day. I walked about 20 minutes each way to get to work. So, if I put about $10/week on my bus card, that covered my other transportation. Healthcare in Korea is amazing so no worries there. In fact, I only really needed half of my paycheck each month to cover my lifestyle. And I use the word “needed” loosely as my weekends were packed meeting new friends, going out to eat and seeing the country. The other half went to paying off debts.

Discovering financial independence and the world of passive income

After getting everything paid off, I came home to the states for a few months in 2013, and happened to attend a seminar on real estate. I went with a buddy, spent two days learning about how to make money in rental properties. I had always been interested in real estate and passive income. I’d read Rich Dad Poor Dad and The 4-Hour Workweek. But this time, something clicked differently with me.

My wife-to-be was across the country doing an internship at the time. When she was up for a visit one weekend, I took her to the seminar and we were both hooked! We got married in August 2014 and started a life together with next to nothing in the bank. But, we were driving hard to purchase our first house. I spent the next year and a half listening to podcasts, reading books and blogs, attending meet-up groups and online seminars, determined to be an expert in real estate investing.

The most productive sick day ever

One day in December 2015, I stayed home sick from work, which I rarely do. I knew we were close to being able to finally purchase an investment property and I didn’t want to be totally unproductive for the day. So, I began emailing and calling the turnkey company I had planned on using. We realized that we had actually saved enough to buy two! So, within a couple of weeks, we had actually closed on our first and second investment properties.

We still own those properties today and we’re saving up for a third property. It’s been a little longer than expected to get into another one, but we’ve taken the time to get our finances in a more stable place at home.

Discovering that life begins before FI

We dream of being financially independent, and we’re on that path. But, we make a little less money than is ideal for the path of early retirement and financial independence. If we waited to “live life” until we reach our FI number, then we’d live a very frustrating life until then. So, we’ve taken steps to live a fulfilling and purposeful life. I’ve quit my higher (not high, but higher) paying job to teach English full time to a part-time position at a non-profit. While I did enjoy teaching pre-school, it was starting to become routine and I hate routine.

My wife (Mrs. Seoul) also quit her job last year to pursue one of her dreams and started her own business selling her art online. I still teach English about 10 hours/week to make sure the bills are paid. We’re also continuing to add to our investments and maintain our investment properties. But, other than that, we’re pretty much living the life we plan to live after reaching FI. We’ve drastically cut our expenses and lifestyle in the past couple of years. We look forward to life after FI, but living a life of purpose and intention is proving to be quite fulfilling. 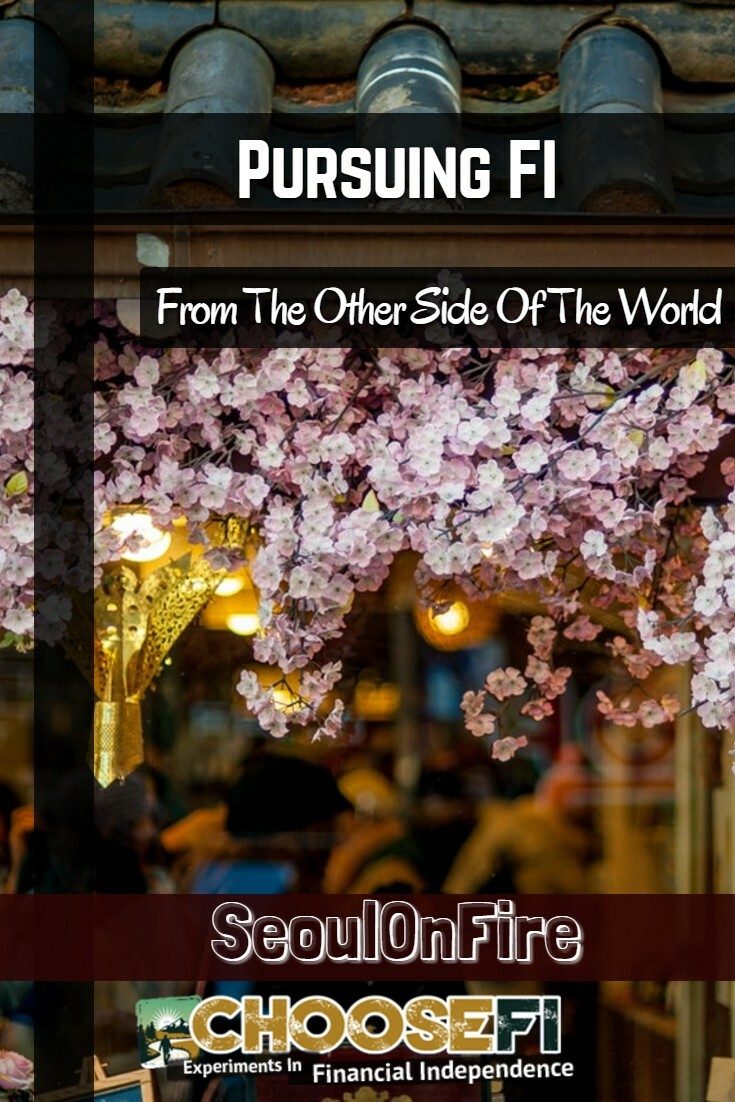