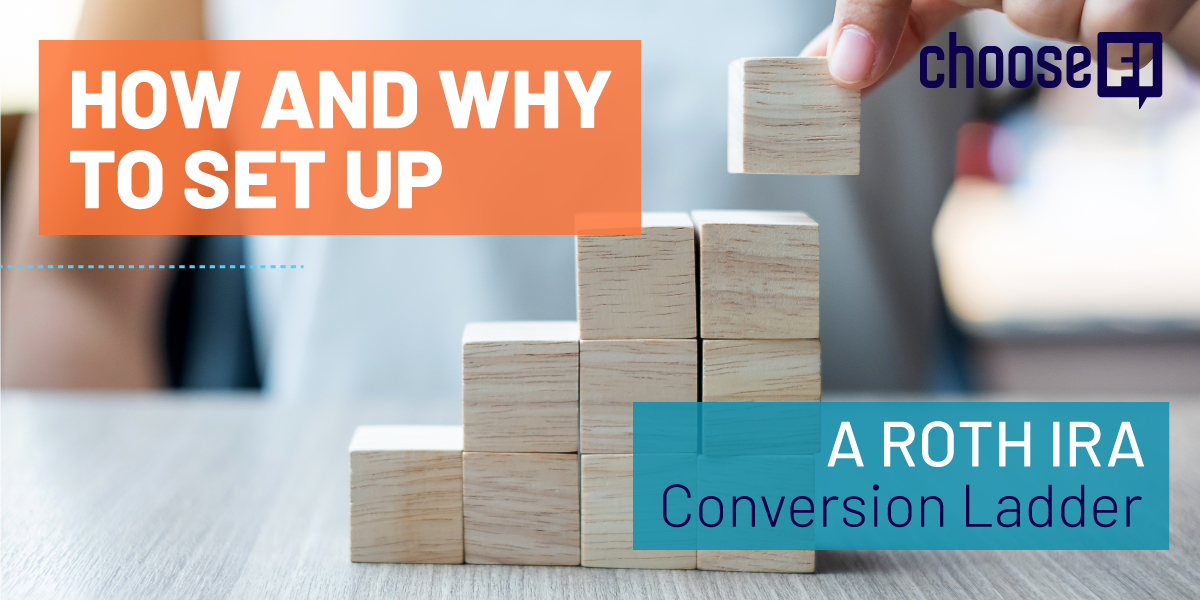 How And Why To Set Up A Roth IRA Conversion Ladder

One problem with retiring early is that you can't access your tax-sheltered retirement accounts until 59 1/2 without taxes and penalties. Luckily the Roth IRA conversion ladder can help solve this problem.

A Roth IRA conversion ladder entails moving your money from a tax-deferred account, such as a 401(k) or traditional IRA, into a Roth IRA. The benefit of doing this is that you can withdraw the converted funds from your Roth IRA after only five years.

The Basics Of Roth IRAs

Before we go any further, let’s take a quick look at Roth IRAs and how they are uniquely suited to early retirement. Roth IRAs are similar to tax-deferred retirement options with a few key differences:

There are other loopholes for taking money out of a Roth IRA, such as using them to pay for a first-time home purchase or qualifying educational expenses. However, for the purpose of early retirement, the three points above are key.

Here's an article that discusses the other loopholes if you are curious.

Now let’s look at the other piece of the puzzle–the Roth IRAs conversion.

The Roth IRA And Early Retirement

As retirement plans go, Roth's are pretty unconventional. While you don’t get the benefit of tax-deductible contributions, you do get tax-free growth.

At age 59 ½, you can begin making withdrawals of both contributions and investment income fully tax-free. Got that? Tax-free income in retirement–not tax-deferred.

Not surprisingly, this has led to a massive wave of Roth IRA conversions. That’s where investors move money from regular retirement accounts–401(k), 403(b), and traditional IRA plans–into Roth IRAs.

This is referred to as a Roth IRA conversion.

Unlike simple rollovers of funds from one retirement plan to another, Roth IRA conversions generally have tax consequences. You will have to pay ordinary income tax–but not an early withdrawal penalty–on any retirement savings transferred into a Roth IRA in the year of conversion.

On the surface, that may seem scary. If you’re looking to create a stream of tax-free income in retirement that benefit usually outweighs the current year tax liability.

Because of the tax liability, it’s most common for people to do a Roth IRA conversion over several years. That will minimize both your tax bracket and your taxes in the years of conversion.

Withdrawals from a Roth IRA can be taken tax-free. This creates a potential source of tax-free income even in early retirement.

Since Roth IRA contributions are not tax-deductible, they can be withdrawn tax-free at any time. That means even before you turn 59 1/2 and are in the plan for at least five years.

This has to do with IRS Ordering Rules, which allows the first withdrawals taken from your Roth IRA to be regular contributions. Since your contributions were already taxed, you can withdraw them without paying ordinary income tax or an early withdrawal penalty.

Roth IRA conversions are different. The IRS imposes a five-year waiting period after each conversion. If you withdraw the converted balance before five years you will be hit with a 10% early withdrawal penalty. (You won’t have to pay ordinary income tax because you already paid it when you converted the funds to the Roth.)

Here's more info from Investopedia on the five-year waiting period.

Related: Why You Should Fund Your Roth Even If You Don't Need It

Why Conversions And Not Annual Contributions?

Wondering why it’s necessary to do a conversion, and not simply make annual Roth IRA contributions? It has to do with dollar amounts.

It would take a very long time to accumulate a large Roth IRA account with such small contributions. If you plan to use your Roth IRA for early retirement, you may not have enough money saved in your Roth to support you until you can access your 401(k).

It’s more likely you have that kind of money saved in other retirement plans. This is particularly true of employer-sponsored plans, like 401(k)s. You will have both higher contribution amounts and a potential employer match.

Taking advantage of conversions allows you to contribute your annual contributions to the Roth. It also allows you to move money over from your 401(k) allowing for a much larger balance in the Roth.

Creating Your Own Roth IRA Conversion Ladder For Early Retirement

If you start doing Roth IRA conversions for at least five years before your planned early retirement, you’ll be able to begin withdrawing those contribution balances. They will be tax-free and penalty-free by the time you early retire.

As an example, let’s say you plan to retire at 50. You decide that you need at least $40,000 in tax-free income per year. At 45, you begin making annual Roth IRA conversions of $40,000. In each year you make the conversion, you pay the applicable tax on the amount converted.

By the time you turn 50–and your initial conversion is five years old–you’ll be able to withdraw the $40,000 conversion balance you made at age 45. If you do this for ten years, beginning at age 45, you’ll have a steady tax-free, penalty-free income of $40,000 per year through age 59.

At age 59 1/2, you can begin tapping any and all other retirement plans you have available, penalty-free, and subject only to ordinary income tax. And, of course, any amounts you have remaining in your Roth IRA account can continue to be withdrawn on a tax-free basis.

We’re throwing out a lot of numbers, so let’s see how this works in the table below.

An Important Caveat To The Roth IRA Conversion Ladder

As you can see from the table above, a Roth IRA conversion ladder can do an outstanding job of providing you with tax-free, penalty-free retirement withdrawals well before age 59 1/2.

But there’s a Part B to this strategy that’s equally important. If you’re going to use a Roth IRA conversion ladder to fund your early retirement years, you have to make sure there’ll be plenty of retirement assets left by the time you reach 59 ½.

In the example above, the total amount of retirement capital used for the Roth IRA conversion ladder is $400,000. That’s a lot of capital to burn through before you even reach 60.

For the strategy to work, you’ll have to have enough other retirement savings to provide you with an income for the rest of your life. Exactly how much that will be will depend upon how much income you’ll need during the traditional retirement years.

Complicating this issue is the fact that you won’t be eligible for Social Security until age 62 at the earliest. And if you begin taking benefits then, it will be at a greatly reduced level. Full retirement age for Social Security purposes–the age at which you’re entitled to your full retirement benefit–doesn’t begin until age 67 for most people today.

That means you may continue to be entirely dependent on your retirement savings between the time you reach 59 ½ and you begin collecting Social Security benefits. That would take a very large retirement portfolio.

Related: When To Claim Social Security

Two alternatives to consider include:

The Roth IRA conversion ladder is an excellent strategy to provide income during the early retirement years. But it only makes sense if you have the kind of retirement savings that will also provide a generous income when traditional retirement arrives. 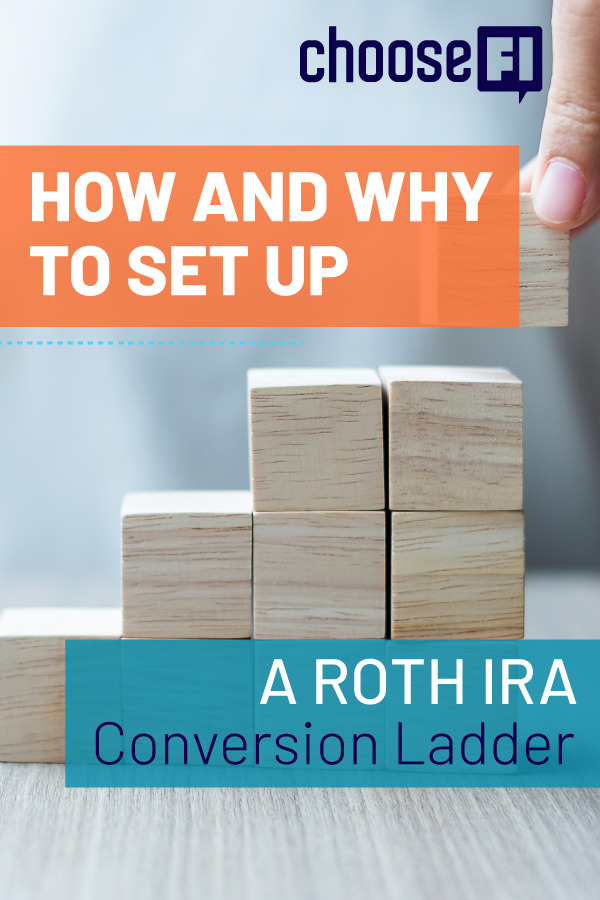 Register for How to Start a Podcast Workshop