When To Claim Social Security

Are you afraid that you won’t be able to “get yours” when it comes to social security and therefore plan to take it early? Or do you procrastinate so bad that you don’t think you’ll claim social security until 70? Well, there’s some planning you can do that could significantly change the lifetime benefits you receive.

Once you get to retirement, you have the choice of when to start claiming your benefit. You can claim them as early as age 62 or as late as age 70. Claiming benefits at these different ages will result in a reduction or increase in benefits. Therefore, it makes sense to weigh your options carefully. Consider the factors which impact the timing of your decision.

When deciding on the date to claim social security, it’s important to note that you have limited opportunities to change your mind.

If you claim benefits early, you have a 12 month window in which you can change your mind. You’ll need to repay all of the benefits received to date and defer benefits to a later date. This will nullify the 6.66%+ reduction in benefits you had been subject to due to claiming early.

If you’re delaying benefits, you can change your mind and get the benefits you otherwise would have received. This is only if you have filed for benefits and then suspended the receipt of those benefits. File and suspend used to be a strategy to allow married couples to receive higher benefits. But, that was removed as an option recently by the Social Security Administration due to perceived abuse of the system. For individual claimers, it is still possible to use this strategy to your benefit. In practice, you would claim benefits at age 66, then immediately suspend those benefits.

If at age 67, you decide you want to receive that year of benefits, you can change your mind and get all of those back benefits in a lump sum payment, and then your regular benefits would begin to be paid going forward. You would lose the 8% per year increase in benefits from delaying. But if at age 68 you have a life changing event like a cancer diagnosis, it’s a good option should you need to reevaluate your strategy.

The easiest way to compare claiming ages is to see when you would break even between the two strategies. Any time after the break even age, you will be better off delaying.

For example, if you’re comparing claiming ages of 66 and 70, your benefit received at age 66 will be lower than that of age 70, but you’ll have received four more years of it. If your break even age is 78, you will have received the same net benefits by that time. After age 78, you will always receive more from the delayed strategy since the monthly benefit level is higher.

Depending on your anticipated life expectancy, claiming early or late may be an important consideration. In our calculations, in most cases the break-even age for claiming social security is between age 78 and 81.

Obviously if you’re married and your spouse is younger or older than you, this will impact your break-even age calculation. With every situation being a one-off case, there isn’t a great rule of thumb on actual break-even dates. Current statistics indicate that women have a longer life expectancy than men, so that should be a consideration as well.

When a married couple both claims social security, the spouse with the lower earnings record (and associated benefit amount) can receive benefits from either their own record or claim half of their spouse’s benefit.

Sources of Income in Retirement

Beyond the obvious case of not having enough assets to meet retirement spending needs, evaluating your portfolio should be an important step in making a decision on when to claim social security. Having only portfolio assets in retirement may make a guaranteed income source much more valuable. Alternatively, you’ll be less dependent on benefits if you have other guaranteed income sources like a pension or annuity.

Since your social security benefit is guaranteed by the federal government, it’s as good as a guaranteed pension. In fact, with the inflation adjusted benefits, it’s better than most pensions out there! Because of this guarantee and inflation adjustment, delaying your benefit can be considered an investment in “longevity insurance.”

This usually refers to deferred annuities, where you purchase at age 65, but it only starts to pay out at age 80 or later. By deferring, you get a higher annuity payout. Delaying social security achieves the same outcome; you are essentially purchasing a higher paying annuity stream out in the future. This could allow for an increased drawdown of assets earlier in retirement (or lower portfolio balance needed for retirement) due to the receipt of guaranteed income later in retirement.

Another factor that plays into your claiming strategy is your assumed rate of return on investments. In claiming benefits early at 62 vs. 66, you’d be offsetting withdrawals from your portfolio for four years. When deciding when to claim benefits, it is not as simple as just comparing that rate of return or 6.66% (claim early) or 8% (claim late) to your investment returns. Because social security is an inflation adjusted annuity stream, the calculation is a bit more complicated. 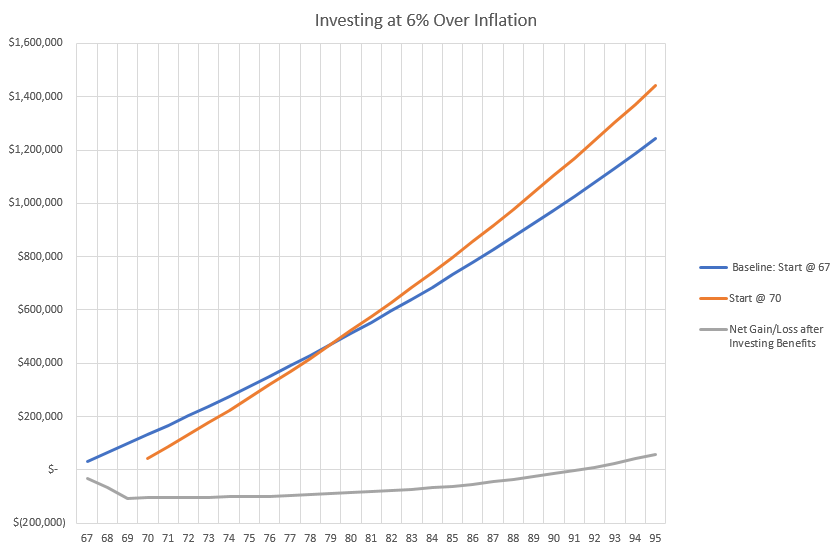 Net Benefits take a long time to catch up!

All Things Considered, it’s Likely That Delaying Benefits to Age 70 Will be The Best Option For an Early Retiree.

Being married makes delaying more beneficial as the life expectancy calculation is spread over two lives. Health and the likelihood of having a guaranteed source of income in retirement will probably be similar for those working towards FIRE. Each person will have their own circumstances that could change these recommendations, but these factors should provide a jumping off point to start your calculations.

Do you have any other reasons that you would consider when trying to decide whether to claim early or late? Let’s discuss it in the comments! 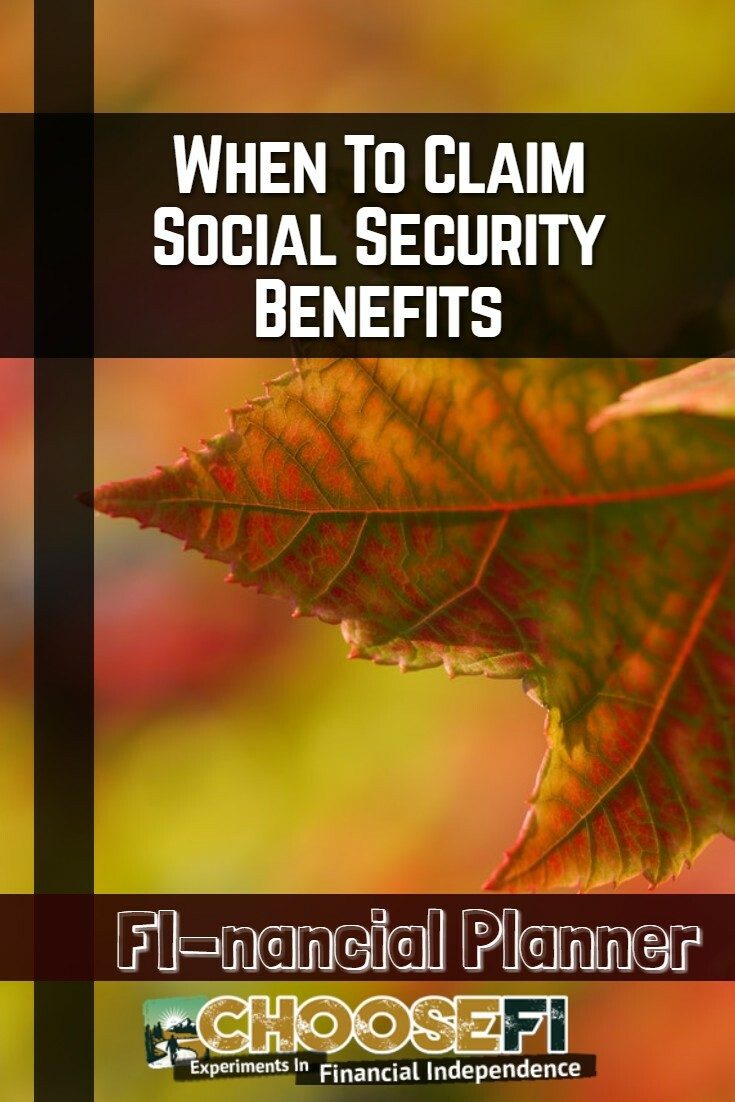