A recent opinion-piece in the New York Times caught my eye.

I gave it a shot and liked the calculator well enough.

Here’s the link if you want to check it out.

While several universities participated in the project, I picked the University of Virginia as an example, since both Brad and Jonathan live there.

These were the numbers I plugged into the calc:

And this is what the calc returned: 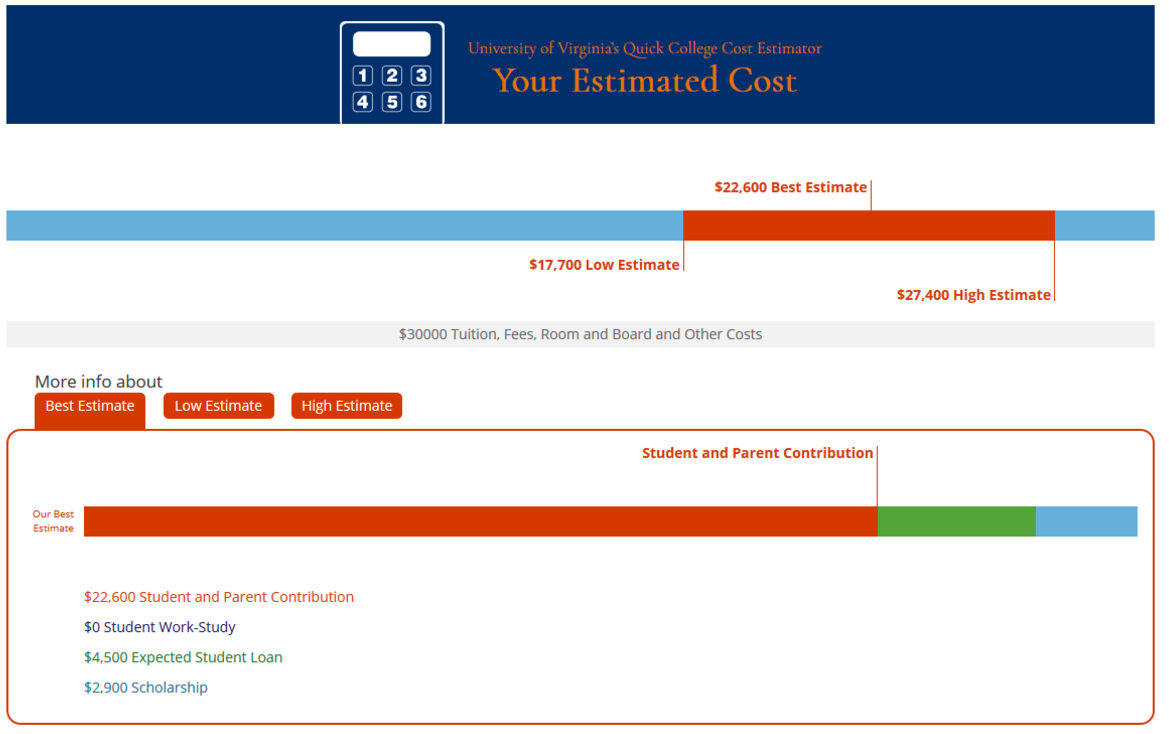 That threw me off, because my son is in the University of Washington now, and we will not spend more than $26,000 when he graduates. In TOTAL.

With no student loan, and excluding any scholarship money or financial aid.

Something was off, and I just had to get to the bottom of it.

My immediate thought was that the UW cost less than UV, and that was true.

Here is what the University of Virginia costs per year:

And here is the breakdown:

And here is what the University of Washington costs:

So ok, there is a $5,000 difference between the tuition and fees of the two universities.

Short of taking up residency in a state with cheaper college tuition (hmm, now that’s another rabbit hole to get lost in), this revelation didn’t answer my bigger question.

Which was, how my son will be getting his degree for the same amount of money as what his peers will be blowing through in just one year.

Digging into my records uncovered the missing pieces, which were the things we did to whittle down that price tag with some college hacking tactics.

When my oldest was a sophomore in high school, I coached him to start looking at dual enrollment (not available in every state).

With dual enrollment, high school students get to earn college credits paid for by the state.

Next, and related to dual enrollment, we used college credit arbitrage techniques to save a bit more money. This is nothing more than paying for credits at a community or technical college, where the cost per credit is often lower, and transferring those credits to the university of choice.

The difference between dual enrollment and college credit arbitrage is that for the former, the school district sets the boundaries on what it will pay for. With the latter, your student chooses the courses since the credits are paid for out of pocket.

Caution: lots of research required! You don’t want your student picking a course only to find that the credits can’t be transferred later.

Done well, dual enrollment and college credit arbitrage helped my son graduate high school with a GED AND an associates degree. It also let him transfer directly into his Junior year at the university level and skip the dreaded SAT altogether.

This saved him 2 years in tuition and associated fees, or about $18,000. For more details on his dual enrollment experience, check out an article I wrote here.

Slashing the MSRP of College Tuition

I’m not going to get into a discussion about what a person should major in, what the best school would be for that field of study, or even whether college is needed. That’s a personal decision and none of my business.

What I will do is highlight two obvious things from a FI perspective.

The first is to pick an in-state college, versus one out of state, even if the latter is a more prestigious institution.

This is especially true if going out of state forces your student to sign up for a student loan.

At the University of Washington, the estimated cost of tuition (excluding other costs) is as follows:

The gap is even higher at the University of Virginia:

That’s a big chunk of change right there! From a purely financial perspective, an out-of-state college should be out-of-bounds for most people.

Somewhat linked to the decision to stay in-state is the cost of room and board.

The estimate for room and board at the UW is $11,691, which is even pricier than the UV, at $10,726 a year. That’s not surprising, given how heated the Seattle real estate market is.

So, one option is for your student to stay home and commute if feasible (if they can put up with you).

Or, if that’s not practical, your family might want to explore house hacking, which is the practice of:

House-hacking is more than just saving on living expenses though.

It has the potential to teach some concrete life skills, and help a person get started on the path to financial independence much sooner.

When I was in college in the 1990s (yes I am that old), I persuaded my mom and sister to buy an apartment near campus. We rented 3 out the 4 bedrooms out, and I managed the tenants, leases and the property.

I learned a ton.

Such as, I was a terrible handyman. Once, I tried to hammer a screw.

But I also learned that I had a decent brain for property management, real estate, and business in general.

By house hacking, I covered the mortgage for my mom and sister, invested the profits, and earned a small sum. I also learned a lot about human nature and why screening tenants is so important, but that is another story for another day.

After I graduated two years later, we sold the apartment for about a 10% appreciation, which was an added bonus for my mom and sister.

Coach Carson, who was a guest on one of the podcasts, has a great series that you can look into if this is something that you want to do.

I am no expert on financial aid. What I will say is that every college-bound person MUST apply for it using the Free Application for Federal Student Aid (FAFSA).

Not just for the chance to score a Pell grant or some funds from the college of choice, although those are important reasons to apply.

The reason every student should fill out the FAFSA is that many private-sector scholarships also require this as part of their application process.

I would also say that while I discourage student loans in general, there is one kind that I like – the ones that are interest-free until 6 months after graduation.

If your student is a responsible and financially-savvy hustler, that’s a loan worth considering. Maybe use the money as a deposit for house-hacking?

In general, the lower you can get your taxable income, and the less assets you have in taxable accounts, the more likely you are to get more aid. If you are at or close to financial independence, this gives your student the advantage, as you have more options on how to structure your finances to optimize for this.

Thanks to SeonWoo, I have my plans lined up for my two younger kids. It was a little more complicated for me since I own a few businesses that bring in a fair amount of passive income, which also meant I was excluded from filing what was called an IRS Form 1040A – one of many conditions to getting the biggest amount of aid.

Working with my awesome CPA, we were able to figure out a plan. It would take work and lots of paper shuffling, and needs to be completed 2 years before my younger son is in college.

But unless the rules change (and they may), we are on track to qualifying for what’s called an automatic zero EFC (Expected Family Contribution).

Another thing that your student should be doing is to assemble his or her own scholarship plan.

While this wasn’t something my son did because he was away in the army, it’s something we’re looking at now for his siblings.

It doesn’t matter that your student is not a major achiever in academics or athletics. Yup, you heard me right. What matters is a can-do attitude that demonstrates initiative and drive.

There are thousands of small little scholarships that are offered to high school students every year for college. These usually range between $500-2,000, which doesn’t sound like a lot.

But the funds can add up quickly, so it’s something that I encourage my kids do, especially my youngest, who is the most focused and driven of my brood.

You can read how I am helping her with her DIY scholarship goals when I am done with the post.

This is another no-brainer.

Now that your student is in college, they should be doing what they can to earn an income. Maybe it’s finding work in the university or a gig off campus.

There are also several rideshare side hustles that are more flexible, such as delivering people, food, or packages. I experimented with DoorDash, GrubHub, and Peach as side hustles, just to get a sense of what that was like. My oldest does this between classes now.

If your student has already hacked her own micro-scholarship package, make sure she keeps going back to that spreadsheet and keep mining the opportunities.

This next, and final, part sounds both preachy and hypocritical, because, erm, I enjoyed my time in college.

But it’s crucial that your second-generation FI student stays frugal and lightens up on the partying. After all the hard work, the last thing he needs is to literally piss away all the money they’ve saved!

If they’ve picked up the same FI values you’ve lived by, that shouldn’t be a problem.

That seems to have stuck. I hope.

So there you have it.

Some simple steps that second generation FI can score that college degree without being weighed down by debt!