How And Why To Start A Career In The Trades

Upon reading the title of this post, you’re probably wondering: Why would I want to work in the trades?

Well, for me, I knew I needed to do something physical. I like to move, and sitting behind a desk all day holds negative appeal for me.

As an addendum to that last point, every time (almost literally every time) I meet someone and they find out that I am an electrician, their eyes light up and they start describing the impending project or issue they have that requires an electrician.

I did not start out my life wanting to be an electrician. In fact, I received an Associate’s Degree in graphic design and worked for five years in the sign business before I realized I needed something different.

My wife recognized my need for change before I did. She knew I had developed an interest in learning more about electrical systems from the rudimentary ones I had worked on in the sign business. I suddenly started getting recruitment emails from local “after-market” vocational schools asking if I’d think about checking them out.

Eventually, I caved and went to an open house. When I saw the electrical program they offered and the hands-on nature, I knew this would work for me. I immediately inquired about the details and soon after signed up for a one-year course.

Every state has different requirements for attaining licensure as an electrician, and I live in one of the most stringent, Massachusetts. At the time (eleven years ago now) I needed 600 classroom hours and 8,000 apprenticeship hours to be eligible to take the Journeyman Electrician exam.

The course I took provided all of the classroom hours, and approximately 600 field hours as well. And the best part? One of my instructors knew a contractor looking to hire an apprentice, and because I was on the higher end of the class in terms of interest level and learning ability, I was recommended to the contractor.

I worked for that contractor my entire apprenticeship and learned an incredible diversity of skills in the meantime.

This process cost me $25k. Not bad, considering most of my peers were getting out of college with at least twice that in student loans. Granted that was over a decade ago, but the ratio of cost has, if anything, changed for the better for trade schools.

That example was my story, but there are other ways to enter into this lucrative world. In fact, I have a friend whose younger brother went through a plumbing program at a vocational high school, and therefore got all of the benefits I got but for free! He left high school with all of his classroom hours and many of his field hours, had a job as an apprentice waiting for him when he graduated (in fact he even worked part-time while still in school, thereby earning even more field hours) and now has an extremely successful business at the age of 26.

I’ll link to a list of the “after-market” vocational training programs here for those who are beyond high school. I’m guessing that is pretty much everyone reading this.

Everyone knows that construction is the first area to feel the crunch during an economic downturn. Why would you want to get into the first field to feel the chopping block when things go south?

I’ll refer you, again, to me. I started my job as an apprentice in June of 2007. As history tells us, the next couple of years were not the most shining moments of our economy. The company employing me definitely had a bit of a hard time, but we all made it through with our jobs. Sure, we weren’t working on new construction anymore, but people had shifted their focus from building new to refurbishing existing. The phone kept ringing.

Let’s talk about the side hustle

This is where the real bread and butter is in this world. I wrote an article about creating a lucrative business on the side here. So let’s talk about the benefits having these trade skills and licenses creates.

Once I got my Journeyman’s Electrician License, I was legally allowed to do electrical work for hire in my state. This meant that no matter my employment status, I could always supplement my salary by taking jobs on the side.

If we look at the Big Three pillars of FI (frugality, income, investments), the one we tend to have the least personal control over is income.

Now that I have my own business, I can determine how many jobs I want to take on and how much I would like to charge per job. I set my hourly rate just a hair below the market average, which in my area is $85 per hour. This means I can charge $75 per hour and people are happy to pay it!

Think about what that means for your FI journey: Adding the ability to make $75 for each hour of your time spent working is a huge jump from what most of us are making in our day jobs. Once we have established a reputation as someone who does quality work we can pick and choose which jobs we would like to take on.

That brings up yet another good point: building a reputation. I know there is a saying that goes something along the lines of, “it takes a lifetime to build it, and one second to destroy it”. I may be paraphrasing here, but in the world of trades, reputation is pretty darn important.

That being said, building a good reputation is not as hard as you may think. In fact, returning phone calls will put you ahead of the game, as for some reason trades people have a tendency to be lousy communicators. I can’t tell you the number of times I’ve had people comment on how grateful they were that I called them back, even if it was to say that I couldn’t do the job.

What about the day job?

Right, I suppose it would be good to talk a bit about the actual jobs and how those pan out, wouldn’t it?

Like I said earlier, I spent my apprenticeship, and about a year past that, working for a contractor. I did a range of work from small residential service calls to installing 4,000 amp electrical systems for factories to installing fire alarm systems for business parks.

The diversity of work was fantastic. I often had no idea where I would be from one day to the next. This variety kept my days interesting and gave me access to many areas that are never seen by the public.

Some days I came home a filthy, exhausted mess, and I would have to take off my clothes on the front porch before I was allowed into the house. Other days I would come home clean and shiny.

My work might have me repairing the light fixtures over vats of caustic acid at a powder coating factory, or running ethernet cables in a library.

After a while, the unending variety got to be a little much. Plus, I was beginning to realize the small company for whom I worked offered no growth potential. The wages weren’t great and the benefits were worse, and I knew it was time for me to move on.

Eventually, I ended up getting a job as a maintenance electrician for a local university, and now my days consist of extreme regularity and climate-controlled workspace. My wages are pretty good and my benefits are fantastic. Plus, I come home clean at the end of the day.

My point in relating all of this to you is that the possibilities are nearly endless in the trades. Look for a job in an area in which you might be happy. As I said earlier, a huge gap in skilled trades workers is looming. Soon there will be many many companies out there desperate for help. The laws of supply and demand will be on your side.

A perfect example of this in Massachusetts is solar energy. A law recently passed that requires electricians on-site at solar installations. Solar companies were suddenly scrambling to hire electricians, and I have been contacted by several. As an electrical license holder, you hold the cards in these cases.

Wow, we’ve gone over quite a bit today! As we wrap up this discussion, I’d like to end it by saying that trades aren’t for everyone. Especially in the beginning, you might find yourself in situations that are uncomfortable and possibly dangerous, and you may find yourself wondering why the heck you ever considered this as an option in your life.

That being said, my career has provided me with an incredible life, and it supports my family. I’m able to use my skills to make repairs and additions to my house, and if one of my neighbors has an electrical emergency I hop into action and save the day.

For me, the choice to become an electrician, though made somewhat by happenstance, has been one of the best decisions I have ever made. I think as time goes on we’ll start to see the trades portrayed in a brighter and brighter light, as society begins to realize what life would be like without them.

The choice is yours, of course. Just know that it’s never too late to start; the trades will always be there waiting for you. Come on over and see what they’re about! 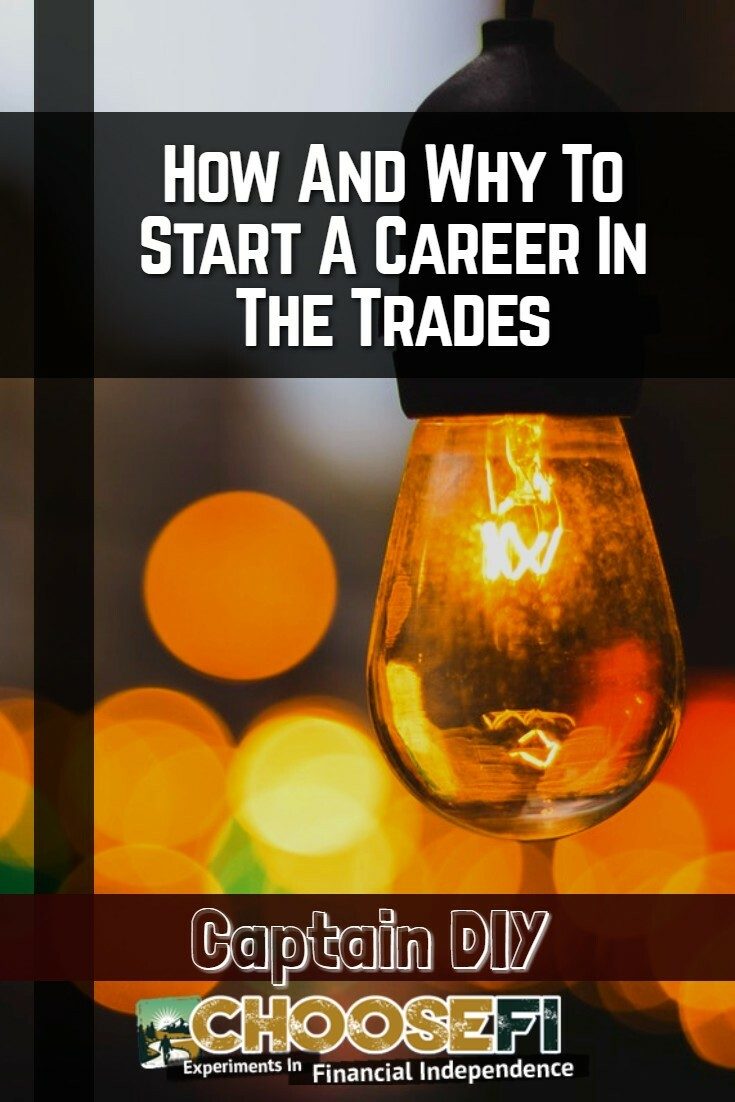