Where Are All the Tradespeople (In the FI Community)?

A couple of days ago I ran into an article on Mr. Money Mustache’s blog called A One-Question Survey–Who Are the Mustachians? The survey asked readers what their fields of work were. Among the choices were such illustrious occupations as Software Engineer, Lawyer, and Teacher.

Naturally, I proudly placed my vote in the “Trades” category, and then the results came in. Guess where the trades are on the list? If you guessed absolute bottom, congratulations!

What’s Up With That?!

The trades worker population is dwindling fast. People are retiring out of positions and there simply isn’t enough interest in the youth to join this lucrative and rewarding field.

For a long time now, people have been ushering their kids into college with the thought that a career in the trades was for someone who wasn’t smart enough or who didn’t have high enough social status. This, as a certain podcast host likes to say, is what’s known as a “limiting belief”.

I’ve gone over the whole employment gap issue elsewhere; today I’m going to get into my theories as to why we don’t see more tradespeople in the FI community.

For one thing, there is a tendency in the trades worker population to spend whatever is left after essential bills on “toys”. Big, expensive, motorized toys, to be exact. Literally, every person I’ve worked with or known who is in the trades has either a speedboat, snowmobile, ATV, or some combination thereof. Not only are these vehicles expensive to buy, but they also require registration (cha-ching), maintenance (cha-ching), fuel (cha-ching), storage (cha-ching), a dedicated trailer that also needs registration, and so on.

The pervasiveness of this lavish consumption means that, according to the social norms of those around you, it is not only okay, it is expected that you have some kind of high-maintenance recreational vehicle parked behind the garage.

As we know, when everyone in our circle of concern is engaged in a particular activity, that activity becomes normalized. When an activity is normalized and even expected, questioning its usefulness is an act of societal separation.

Expanding on the idea of cultural norms, the trades have been in a bit of a cultural “bubble” as far as workplaces go. For the most part, the work performed in the trades involves travel to the job site, which tends to be insulated from anyone but those performing the work.

In an office setting, a culture develops based on how the company is managed, how they handle employee disputes, and the cultural influences brought in by the various employees. Therefore, the office culture tends to be more professional than the trades culture.

This has been made apparent to me during several side jobs and time spent under a contractor doing work in an office setting, where the stereotypically crass trades worker can experience a bit of culture shock.

What About The Money

To bring all of my smarmy cultural babble back around to my original point, here is the main reason we don’t see more trades workers in the FI community. According to me, anyway.

Companies that operate through a typical office tend to offer benefits packages that include retirement accounts, perhaps even with a company match. They also tend to have HR departments who create employee handbooks for new arrivals which spell out all of the options available.

Companies in the trades, on the other hand, lean more toward getting new hires out and on the job as fast as possible, and if there is an employee handbook, it is likely to be kept in the boss’s desk where it is sure to go unread.

These companies are also less likely to make much of a show about any retirement plans they offer, at least according to the experiences of those around me and my own. Especially in the smaller shops, which are a huge part of the overall trade economy, things that are an expectation in the white-collar world may not even be available.

Take direct deposit, for instance. When I worked for a contractor, I tried to open a new bank account so that I could get the generous incentive they offered. One of the requirements was that you sign up for direct deposit. When I approached my boss (the owner), he said they didn’t do direct deposit. The checks came out on Friday, and you did whatever you did with it on your way home.

Obviously, without direct deposit, it is a whole lot harder to automate your savings, which is a time-tested and proven tool to help bump up one’s savings rate.

A Recipe For No Retirement

Combine the various obstacles in the way of retirement saving, the pervasive culture of incredible consumption, and the general lack of financial education in our schools, and it’s no wonder trades workers make up such a small segment of the FI community.

Without things like Choose FI, Afford Anything, BP Money and others, the bulk of the trades population has no idea about the possibility of financial independence even exists outside of a pension.

I’m not sure that we’ll see any huge insurgence of trades workers in the community any time soon, as they also have a tendency to watch TV as their “wind down” activity rather than peruse the web for financial advice. Not to say trades workers are better or worse than anyone else; I think it stems mainly from the exhaustion of a long day of hard physical work.

Really, I think that is a huge reason why trades workers should be the most prevalent group in our community. I only had about six years working under a contractor before I landed my cushy state job, and those six years took a toll on my body. That’s why you see these old-timers who can barely stand up after decades in the business, and yet most of them have next to nothing saved for retirement.

If you’re a trades worker out there reading this, congratulations, you are ahead of the game! You are also a black sheep in your immediate community, as you have decided (or maybe you are currently deciding) to get off the hamster wheel.

See if anyone around you is open to the idea of joining the FI path with you! Sure, most of your coworkers probably won’t go along with it, and that’s fine. But maybe, just maybe, you can hook someone in with you, and then you can be partners in the journey. As Charles Duhigg reports in The Power of Habit (incredible book, by the way), having a like-minded support system of both strong and weak connections can make the difference between success and dropping out. 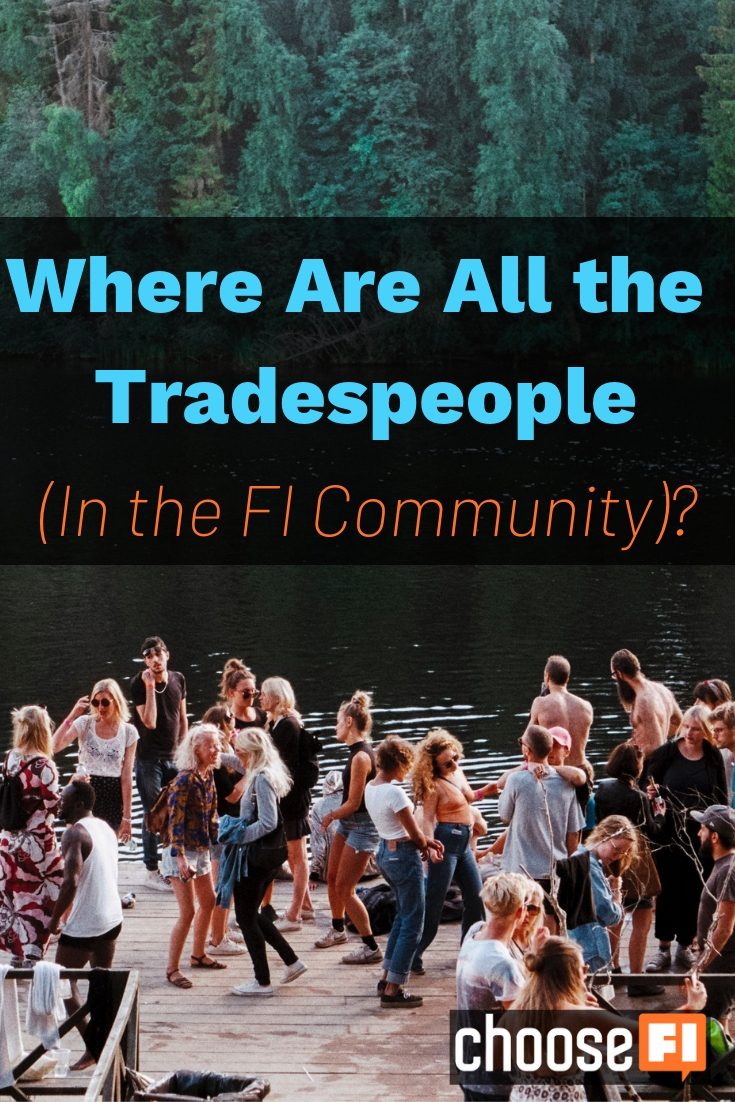