In the fall of 2016, Clayton and her husband John were on their way to FI. They had paid off nearly $100,000 in debt, and the only debt they had left was their mortgage. Additionally, they had banked $5,000 in savings and switched from traditional insurance to a healthshare plan to save more money.

They were young, healthy, and financially stable. Everything was going great. Until all of a sudden, it wasn’t anymore.

In December of 2016, Clayton experienced significant medical issues out of the blue. In her words, they “took her out.” Over the next 18 months, they went from a two-income household to one and incurred over $150,000 in medical bills, which included two major surgeries out of state. Their once-bright future now looked imposing and bleak, buried under a pile of medical bills.

But Clayton found a way out. With patience and persistence, she learned to navigate the world of hospital billing and became a master of negotiating down medical debt. Today, three years past the start of her problems, Clayton and her husband are clear of all their medical debt.

If you think it can’t happen to you, think again. According to a 2016 report, 46% of Americans surveyed had problems paying their medical bills in the year 2015. If the fact that almost half of us have experienced this isn’t enough to scare you, check out these startling statistics. The cost of our medical care is only increasing, as is the likelihood that you’ll experience problems paying your medical bills at some point too.

So what should you do?

Here’s what to do–and not do–to prepare yourself for the process before you make the phone call.

Check your bill for errors: Check your hospital bill very carefully so you know exactly what’s on it and if there are any errors. This includes things like double-charging, charging for tests that didn’t happen, etc.

Get organized: Negotiating debt can be a long process. You should be as organized as possible so you can always access the information or bill that you need when you need it. Clayton recommends having a folder for each bill so that you can keep everything separate. She also recommends having highlighters and sticky notes to annotate statements and a notebook to track both billing conversations and upcoming medical appointments or tests.

Prepare yourself mentally for conversations: Clayton’s greatest challenge she had to overcome before starting negotiations was fear. This stemmed both from not knowing the rules of the billing “games,” but also from some financial security issues she had in her childhood. She had to get over the fear of potential rejection and being out of her element to get started.

Prepare yourself physically for conversations: Many people like Clayton are trying to negotiate medical bills while they’re still in pain and recovering. The timing of dealing with medical bills may be unavoidable. However, you can still choose the best moment to do it. Make sure you’re well-rested and in as little pain as possible when you make your calls.

Know medical lingo: Let’s say you’re having dinner in Spain, and when the bill comes, it’s three times the amount you think it should be. If you don’t speak Spanish, you’re at a significant disadvantage in trying to argue the bill. The same goes for medical lingo. Know the jargon and know the medical codes on your statement and what they mean so you can speak intelligently about them.

Be afraid: The people on the other end of the phone are just that–people. Most of the time they are friendly and want to help you if you treat them kindly.

Be a pushover: Don’t ever accept your bills at face value. If you’re not getting anywhere with a particular rep, ask for a supervisor. If one isn’t available, don’t just give up. Call back again another time. You’ll likely get a different billing rep and might have more success.

Be intimidated: This is your bill and you have a right to ask any question you want about it. Don’t give up until you understand everything about that bill, why the charges are what they are, and what can be done to lower the total.

Renege on a promise to pay: If you reach a point where you are satisfied with a suggested new bill total and agree to pay it, then pay it. Don’t renege later for any reason. Billing departments are willing to work with you until you don’t hold up your end of the deal. If you said you’d pay, start paying.

Plan What To Say

Once you have prepared, it’s time to plan out your conversations with billing reps. Don’t skip this step. It’s helpful to have a script with you to remind yourself of your key requests and talking points, especially if you’re nervous or fearful about making these calls.

Clayton had a plan for every conversation. It helped her stay in control during the call. Her first call to any billing department was always to gather information. She realized early on that you couldn’t deal with billing reps if you didn’t have the same information that they did.

Clayton started by politely introducing herself, getting the rep’s name, and using it during the call. She also noted the date and time that they spoke. Then she would request an itemized bill, and finish by thanking the rep in advance for sending it.

Once she had received it, she would study the bill. She made sure she knew it thoroughly before calling the billing department back again. Her first question on the second call was “What options are available to get help with my bill?” It’s important to note that she said this casually and not in a demanding way.

The way she phrased it is also very open-ended. While it’s not wrong to ask directly for a certain percentage off your bill, you might be limiting the rep. For example, reps may be authorized to give you 50% off of your bill if you pay in full, in cash. If you ask for a 40% discount, you’re paying 10% extra. You also might be ignoring other possible outcomes by presenting a solution without asking what they can do. What if they have the authority to offer a payment plan with no interest but you only ask about lump sums? See what they can do for you before volunteering your own solution.

Position Yourself For Success

Keep these things in mind to increase your chances of success in negotiating down debt.

Don’t wait until the bill’s due date to start the negotiation process. Instead, start gathering your information as soon as you can. If billing reps know that you’re working on a potential negotiation, they may be willing to extend the due date on the bill.

There is also something called Charity Care in each state. It’s free or reduced medical care if you meet certain income criteria. It’s governed individually by state, so check your state guidelines to know if you qualify.

Clayton notes that parts of the negotiation process take time. You need to be patient and be willing to wait for things like an itemized bill or a call from a supervisor. You have to be willing to give the process time to work.

This can be challenging, especially when you’re frustrated about your bill, nervous about talking to a billing rep, or feel like you’re in over your head. Be as kind as possible and remember that the vast majority of billing reps want to work with you. The easier you make this on them by being polite and organized, the more they may help you.

The language that you use with billing departments is very important. In their recent podcast about navigating health insurance, Brad and Jonathan state that you need to be honest about your financial circumstances. You should make it clear that you are willing to work with them, but that you can’t pay the bill the way it stands. Simply asking “Can I get a discount if I pay in full?” should net you at least a percentage off.

Clayton noted that one of the most powerful parts of her debt-reduction journey was her persistence and perseverance. It took her a whole year, but she eventually negotiated her medical debt down from $150,292.41 down to $53,131.37. You can’t endure for a year and get a bill down that far without a lot of persistence.

Take Pride In Your Accomplishment

After she had finished her negotiations, Clayton reflected back on that year and realized she has always been her own best advocate. No one cared about her medical journey and reducing her debt as much as her. Realizing this made her advocate even harder for herself.

Clayton also learned the importance of staying focused on the long-term goal of debt reduction and not getting hung up on the daily frustrations that came along with it. During the process, she realized that taking care of herself was vital to her success with reps. Finally, she also learned that she always had choices during conversations with billing departments, even if the only choice was how she reacted to something.

While not everyone may be able to negotiate debt down as far as Clayton, it’s likely that you’ll be able to reduce your medical debts significantly by following the same steps that she did. We’d love to hear your medical debt reduction success stories in the comments! 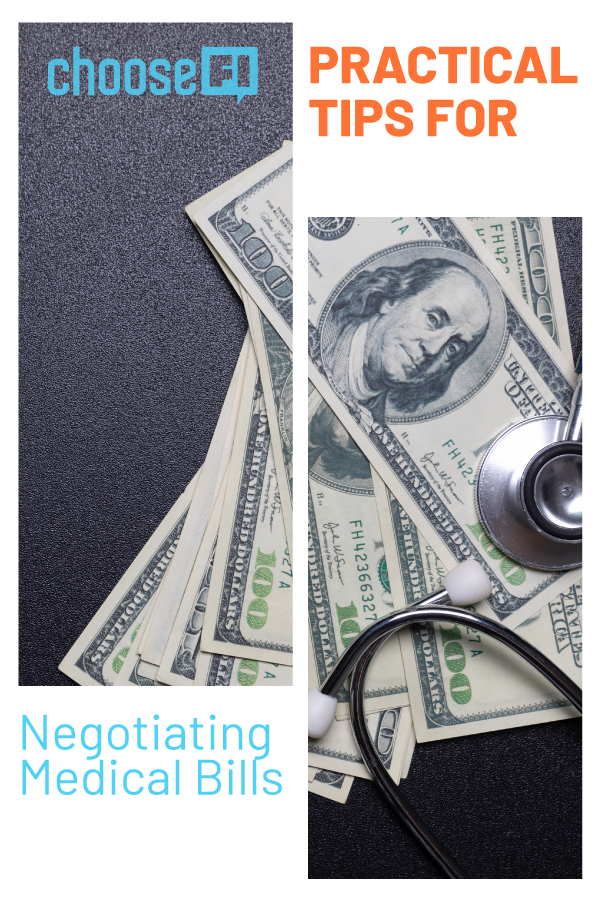