What My Parents Taught Me About FI

My parents never taught me about investing. They taught me how to save money and curb expenses, but they never had a huge savings pile or invested money. I feel that my FIRE path has been hindered from a lack of investing knowledge until later in life.

Imagine if I started a Roth IRA when I was working part time at age 17 with almost no expenses! Instead my money just sat in a lowly savings account.

My parents definitely helped me flex my “savings muscle” by getting me everything I needed but not everything I wanted. But I only learned the half path to FIRE.

I grew up in trailer. My father would proudly state that he was a mobile home owner. We had our trailer paid for as long as I can remember. I lived in the trailer until the day my father fell through the floor, literally. It was time to find another home.

In 2001, my parents bought a four bedroom house because at the time my brother and I were still living with them. I don’t know the exact numbers, but the mortgage was roughly 25% of their net pay at the time.

My parents were frugal when it came to cars. They never bought luxury brands, and the first cars that I can remember, were a wooden panel minivan, and a Chrysler K-Car. The other cars I remember were a Dodge Intrepid, two Jeep Cherokees, and a Jeep Liberty. The Jeep Liberty was bought brand new and is still driven by my mother over 10 years later.

My parents definitely drove their cars into the ground, even though they financed them. We also played musical cars, as my brother loved trading in vehicles and housing arrangements roughly once a year. I was fortunate enough to drive the hand-me-down vehicles, until I financed my first car.

I was lucky enough to receive my undergraduate degree because my father worked at the Ohio State University and one of the benefits was 50% tuition. My parents were able to cash flow my college expenses while I lived at home. I did end up taking a student loan for living expenses for my senior year and that was my first taste of living on a budget.

I did, mistakenly, go into $25,000 worth of debt for a master’s degree–but that’s a whole other story.

My mother has always been afraid of electronics, so she still writes checks, and always will. My father holds the debit card. Even though my mother has warned me my entire life to stay away from credit cards, I’ve let her know that I don’t spend more than I can pay for right away. My father has also loosened up and has a few home improvement store credit cards for home repairs and other “in case items.”

Related: A Series Of Fortunate Events

I don’t recall my parents ever making a meal plan or budget, but my mother was still a coupon queen. She would buy everything that was a 10-for-10 deal. She would constantly be upset with how much she would spend on groceries and other things, but never bothered to make a plan (or sit and talk to my father about how much money they had, as he handled the bills and still does).

My father’s financial independence path was to burn himself out, until his family was taken care of. He worked for 30 years at a job he wasn’t to fond of. But, come hell or high water, he would retire with a spousal pension so that my mother was set, no matter what happened to him.

He did eventually retire early at age 57. The pension was enough to live off of and a little bit extra until social security kicked in. He received health insurance with his pension, so healthcare was covered for the family during early retirement, but my parents still don’t have much of an emergency fund.

The part that scares me even now is that my father retired from something and not to something. That is definitely one part of his financial plan that I don’t want to follow. 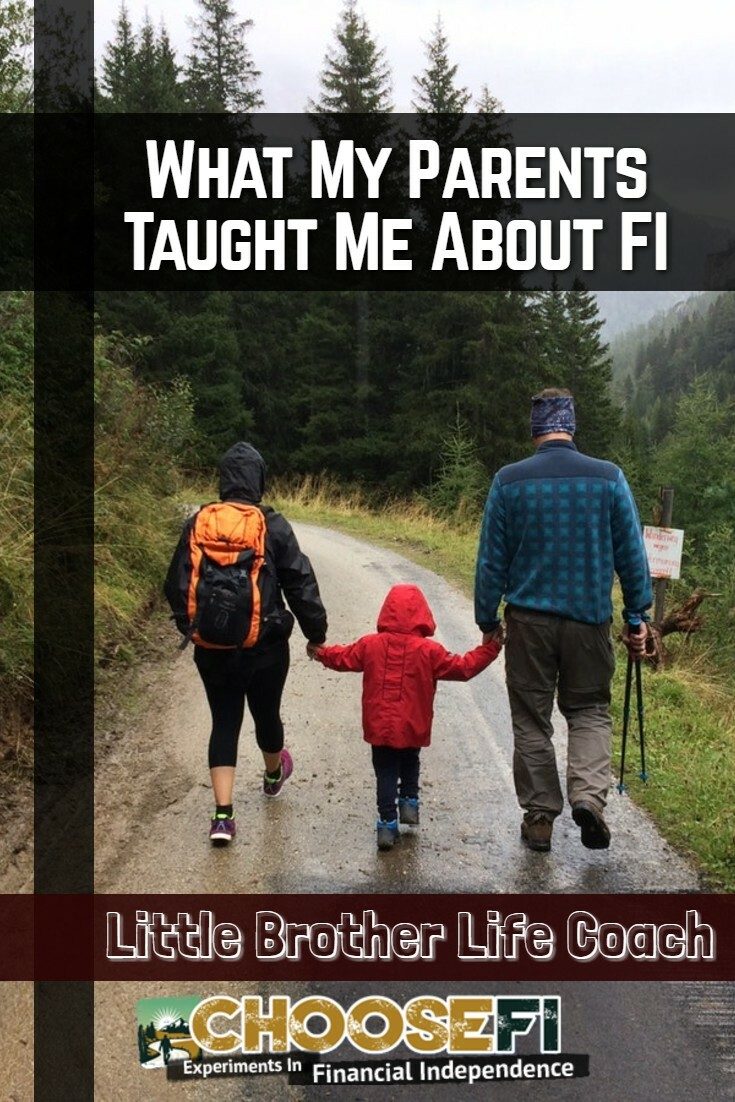