Have you ever been so eager to get, do, or have something that you couldn’t see its failings? We’ve all been there, at some point in our lives, wearing those rose-colored glasses. Many times we’re not fully to blame, and sometimes we are. Massive marketing makes it easy to see only the roses, while the reality is vastly different.

Join me as I shed light on my failing 403(b). The turning point in my investment life, and subsequently my ascent to FI. It was also pivotal in propelling me forward into other investment vehicles beyond the 403(b).

Why is it important for you to read this, and how can it help you? After  all, you are savvy and appreciate value. Fair enough questions. I’m writing this post about it because I’m smart, I understand value, and yet I was fooled into saving in an innocuous 403(b) that was rife with fees in disguise. I want you to be informed, too.

I’m going to fill you in on some nasty secrets in the 403(b) world that even the Millionaire Educator doesn’t reveal.

Everyone seems to know what a pension is and recognizes 403(b) as a something like a 401(k), but with a different number. And while that much is true, they’re actually worlds apart.

First: Why It Matters

Everyone knows the value of a pension but they all assume that working for the same employer for 30 years was an acceptable given. “Oh, you have a pension? Your future is set.” Don’t ever move, don’t change your mind, and don’t aspire to try something new, is left unspoken.

Teaching was a career change for me and it’s immensely rewarding, but I wanted to be able to choose my retirement date and a 403(b) seemed like a great vehicle to get me there. I wanted something I could count on “just in case” I didn’t want to stick around for 30 years.

Looking back, I realize that ultimately, I wanted to be in charge and not reliant on a pension system. And that’s why it matters.

Next: Differences In Retirement Plans

If you’ve ever contributed to a 401(k), you might expect a 403(b) to be the same. You’d be partially right. Here’s a short–but critical–explanation of the differences in retirement plans.

This is a tax advantaged deferred-compensation retirement plan that is available for governmental and certain non-governmental employers in the United States. The employer provides the plan and the employee defers compensation into it on a pre-tax or after-tax (Roth) basis.

A 401(k) plan is a defined contribution plan where an employee can make contributions from his or her paycheck either before or after-tax, depending on the options offered in the plan. The contributions go into a 401(k) account, with the employee often choosing the investments based on options provided under the plan.

The 403(b) is a retirement plan offered by public schools and certain tax-exempt organizations. It’s similar to a 401(k) plan maintained by a for-profit entity. Just as with a 401(k) plan, a 403(b) plan lets employees defer some of their salaries into individual accounts.

The HUGE difference is that the same law that governs employers offering 401(k)’s, (ERISA), does NOT apply to non-profits. This means that employers are NOT accountable for choosing fair and competitive fund options. They load the employee up with high-cost vendor options, tell the employee “good luck, and then invite the sales representative (AKA financial advisor) to the place of employment to prey on an unsuspecting employee.

As a result, vendors like AXA, Ameriprise, and others, have a FIELD DAY!

But don’t take my words and experiences for it. Read it yourself, directly from a 403(b) sales rep: (login is required but it’s free, and wise, to do so.)

I am a 403b annuity sales representative and am in agreement there needs to be massive changes in the way 403b annuities/custodial accounts are sold to non-for-profit employees. In the schools, teachers have no clue what they are being sold to them by us, as we explain it like a 401k for teachers (which is half-truth). We are told to dumb it down and explain it like in the most elementary terms possible. Most teachers don’t even know what they have when they sign up for it (call it a 401b or something like that). Fees and surrender charges are rarely mentioned and when they are, the teachers look at you like a deer in the headlights.

Employees are under the impression the 403b provider has been vetted by the school and endorsed by the administration, however, many in the administration don’t even know the difference between a ROTH and a Traditional IRA, let alone what to endorse when picking the right retirement vehicle. I have been told by administrators not to mention fees and expenses to staff because some can’t even balance a checkbook, let alone understand what I am trying to explain.

It can be like a kid at Christmas for the annuity salesman in the schools. Where else can you walk the halls, knock on doors, introduce yourself, and get an appointment all at the same time. You can tell the teacher anything and there is little accountability. We call ourselves advisors, even though we are working as brokers selling commissions and no one knows the difference.

I was all in and signed up for a 403(b). I signed on the dotted line just as my next class was walking in. Boy, was I happy I took care of that. I remember the sales rep saying “annuity“ and “12 years” and we determined I had a moderately aggressive investment profile. Beyond that, I don’t remember much else.

I set about maxing out my contributions. I considered it an expense. Soon after that, my rep was long gone and I met another rep in the faculty room. Again, I didn’t know it at the time, but only certain vendors were allowed in our school. While they were vetted by the district’s business office, they were selling investment choices they wouldn’t sell their mothers. Nobody knew if the plans were good or bad and if they did, they couldn’t comment, for fear of being accused of advising.

He was quick to point out the problems with my plan. The fees were high, but I justified it as paying for a service. Everyone has to make a living, right? I started to get wise, but apparently, not wise enough.

I switched to his plan. Rather, I tried to. I couldn’t yet move my money because of, lo and behold, plan one’s ridiculous surrender fees because I held the plan for less than twelve years.

Eventually, I started a new plan–plan two. Here, I was paying front-loaded fund fees. I went from worse to bad. How could I be that foolish? It was almost embarrassing. BUT I TOOK ACTION.

To avoid the same mistake, examine the chart below and reflect, then take action. Find out how your plan, no matter which type, stacks up. It’s tens of thousands of dollars, and more, in terms of lost potential.

What’s In A Percentage Or Two?

A modest $250 month investment with an 8% return over 35 years yields drastically different results depending on the 403(b) fees.

I finally tuned in when I came across the website 403(b)wise. I learned about the impact of fees and I learned how others had been duped.

I came across a really helpful community on the 403(b)wise Discussion Board. Why would anyone knowingly spend over $200,000 for unnecessary costs? Because they think 1-2% is a small price to pay for so-called advice. Boy, does that really add up! And yes, advice has its place, but not on my dime. Or my Franklins.

What Can You Do?

My district’s business office personnel completed that process and I put an end to this saga by transferring both 403(b) accounts into my third 403(b) account, where it lives today. Goodness prevails.

Action step: Compare your plan’s fees here, no matter what state you’re in. And then take action.

Read the New York Times series here. Tara Siegel Bernard and I spoke at length and I gave her actual statements as documentation. Call your business office and ask questions. Demand better options.

And then share it with any teacher you know. 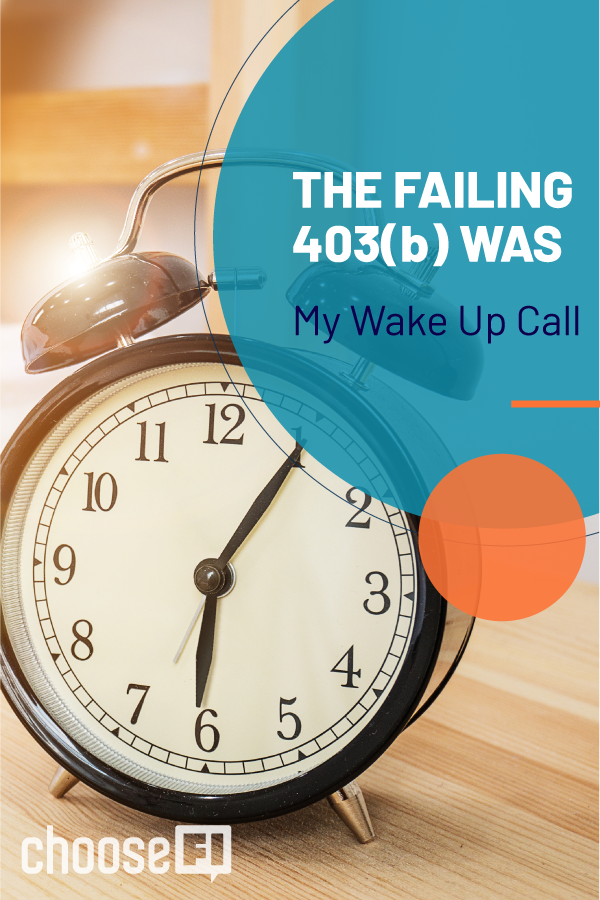