You will find this dish at every gathering in any Russian house, here or abroad. I’ve even seen versions of this salad in other European countries, where it is called Russian Salad. My friend shared that it was even served in many restaurants in Madrid, Spain! This is such a classic, it’s hard to imagine a holiday, birthday, or any get together without it. And it is an absolute must at the New Year’s Eve celebration.

As the legend has it, the salad was originally invented by a Belgian chef, Lucien Olivier. who was working at one of the top restaurants in Moscow in the 1860’s. The salad is called after him, however, the Russians pronounced his French last name as Olivye and that’s what the salad is still called to this day.

The original 1860’s version has gone through several adaptations and personal twists. For most, the current recipe consists of ingredients that were available in the Soviet Union. Olivye salad has lots of ingredients and is very filling. It’s almost a meal by itself!

Many, many years later I still love to make this salad, and there are several variations of this dish. The salad from my Soviet childhood had diced bologna or mortadella, which you could still use if you prefer. But I make it with canned chicken breast for taste and convenience. Some people add raw chopped onions; some add diced green apple. Your personal taste would dictate the addition of those ingredients. Traditionally, canned peas are used in this recipe but I prefer frozen peas. They have more flavor and look so bright, fresh, and colorful.

Since I make it often, I’ve learned a couple of tricks over the years. First, use a veggie chopper, like Vidalia Vegetable Chopper to make uniform cubes and cut down on dicing by hand. Second, and I know it sounds strange–squeeze as much moisture out of the pickles as you can. (The salad tastes great on the second and third day, but if your pickles have a lot of moisture trapped in them, it will separate and make the salad watery.)

So here’s my version. It makes a good amount, so if you just want to give it a try, you can halve the recipe.

You can use poached chicken breast but canned chicken tastes great, is easy to use, and it’s very tender.

Peel and halve potatoes and carrots, boil until fork tender.

Place frozen peas in a microwave safe dish, cover and microwave for 3 minutes. You don’t need to add any liquid. Drain the peas and let them cool down.

In a large bowl, break the chicken breast into small pieces. If you are using canned chicken, it’s very easy to do.

Meanwhile, finely dice fresh cucumber and pickles (you’ll have to dice them by hand, as the vegetable chopper won’t work for cucumber and pickles). I cut the pickles in half lengthwise and squeeze them really, really well. Once they are diced, drain off any additional pickle juice. We don’t want any extra liquid in this salad.

Once the potatoes and carrots are cooked and cool enough to handle, dice them into small cubes or use the vegetable chopper. Cut potatoes into ¼ inch disks, cut carrots lengthwise into three parts and dice both in the veggie chopper or by hand. You should end up with uniform small dice that looks beautiful on the plate.

Transfer the ingredients into a large bowl. Add cooled peas.

Add salt and mayonnaise and mix well. You might need to add more mayo, just make sure everything comes together and is evenly coated. Give it a taste and if the salad tastes a little dry, add more mayonnaise.

Cover and refrigerate for a few hours, letting the flavors blend together. Sometimes you might need to add a little more mayonnaise as it gets absorbed. (You don’t want vegetables swimming in mayo but you also don’t want a dry salad.) I like to taste it before serving to make sure the consistency is right.

Transfer to a serving bowl and garnish with a sprig of fresh parsley. Here’s to a new favorite in your home! 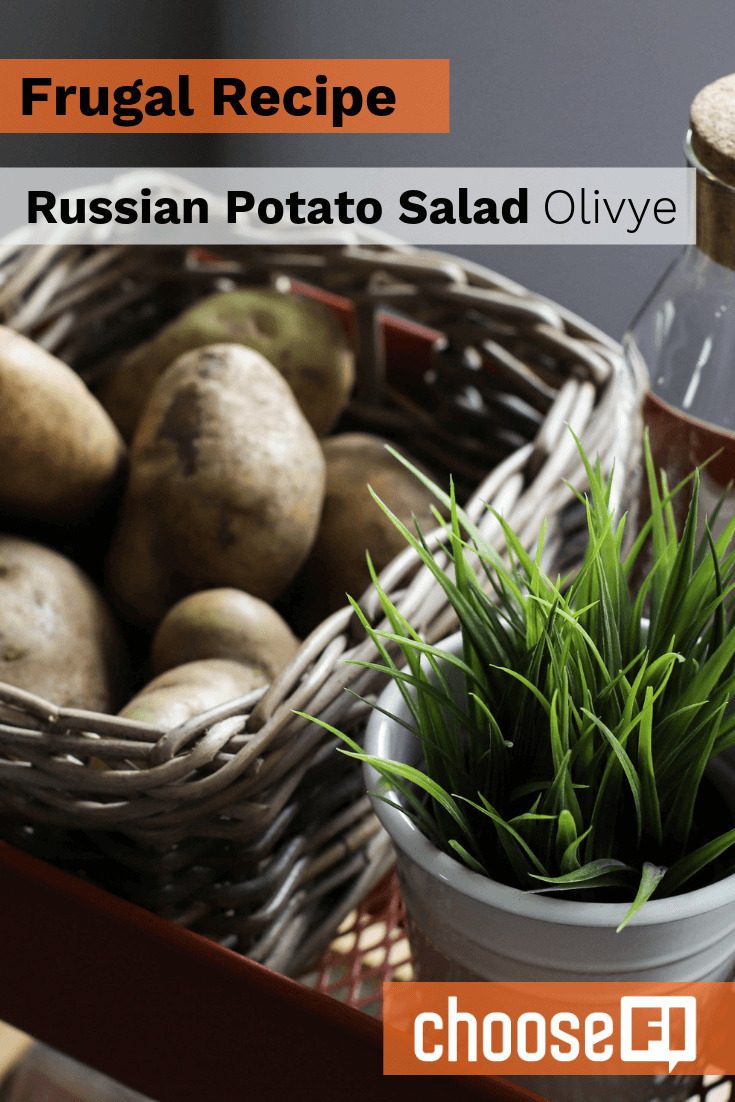