Small changes lead to big wins in the big picture of Financial Independence. With enough small changes, we are choosing to ad margin to our lives and that margin affords us flexibility. It all has to start with an idea.

Tommy is an “idea guy.” He has always had a creative side, but like many of us, that creativity takes a backseat to the everyday responsibilities of leading a family. He couldn’t shake this particular idea and soon realized that he could shift the direction of his family into living their best life now. Coasting during this child-rearing period would mean postponing an accumulation of wealth; postponing the pursuit of Financial Independence.

It was Christmas of 2017 and he felt the need to shake up cinnamon roll tradition and do something different. After mulling over lots of breakfast ideas, the family settled on making homemade donuts. As you can imagine, they were scrumptious not only because of the taste bud experience, but he also found that the family memories in the making were his WHY. Having two little kids help in the kitchen with this project, he knew he needed to try and make it a side hustle.

His goal was to own a food truck. The ideas started flowing and before he knew it, he was buying a donut machine off of Amazon and figuring out the endless details of how to make a mobile donut business profitable. He and his wife Kelly had no idea what we’re doing and completely invented this adventure from the ground up. He had not yet heard of Financial Independence.

In their twenties, Kelly and Tommy spent five years near Yellowstone doing seasonal hard work at basic jobs. These hard workers hustled coffee by day, drinks by night, and did just about anything to earn a few bucks. They earned money when the gettin’ was good. When the work slowed, they took to the trails and backpacked for weeks at a time. During that time, they had little money, always broke, lived in the mountains, and it was a great life!!!

“You don’t have to have much money to backpack.”

That adventurous side of them was stoked once again while making donuts on that Christmas morning. Life is different now with a family and though they can’t recreate their twenties in that way, they can design some adventure and still be responsible parents. Their girls will be forever changed by witnessing their parent’s design goals, dream dreams, and put in the work it takes to make things happen.

Long Term WHY Dovetailing With FI

It just so happened that Tommy heard a segment on NPR about the FIRE movement a few months after buying the donut trailer, which was purchased with debt. This new genre started to consume him and he deep-fried himself in the Financially Independent Retired Early (FIRE) podcasts and blogs.

“Brad and Jonathan on the ChooseFI Podcast made the content so relatable. They are just two regular dudes talking about counterculture aspects of money. I couldn’t stop listening.”

With every new actionable tip came the sense of  “Oh, I can do that! We can do that!”  His wife Kelly was easily on board.

With the new knowledge, imagined possibilities and potential changes to be made, he and his wife started asking themselves some hard questions.

This Family First Lifestyle Change combines passions, priorities and lifestyle change based on side hustling and long term goals. The idea had spiked at Christmas and by May they were popping their first donuts out of the mobile fryer.

Tommy, 41, has been a gas metering technician for fourteen years. His wife Kelly has her ideal life already. Her primary job is Mom. She also has her own custom pet care business, is a part-time inspector for homes heading into foreclosure, and substitute teaches when she feels like it. She owns her time, which would fit well with the donut business. They could comfortably operate the donut truck as their only income if they cut their cost of living enough. The donut gig will let them coast until the girls are grown.

Also, the more efficient they become, the more profitable it will be.

Their rent was a whopping $1,550 per month. Though in a long term lease, they approached the landlord about what they were thinking. The landlord was ready to sell, so they were let out of their lease. Now they rent for $700 a month. A savings of $10,200 per year!

In preparation of their smaller living quarters, they had a garage sale and netted $2,500 in garage sales.

Their two girls, five and seven, love the new home! In the old house, the girls’ bedroom was the size of a studio apartment. Basically, they had their own living quarters. Now, they have put a bookshelf with board games in the only family hangout space and they spend much more time together now by design. Not time apart by default.

They cut magazine subscriptions and a $45 per month TV subscription which they got purely to watch the last Olympics and never canceled. Canceling the gym membership saved them another $750 a year. Creating the new habit of working out at home has been tough, but worth it. Music subscriptions of all kinds are now a thing of the past, including Amazon music unlimited for $14.99 a month. The day the music died.

The best part is that he’s never thought of these cuts as a forlorn sacrifice.

He even moved his Target Date structured 401(k) to reduce the fees from $70 a year in fees to $12.50. The investments themselves have also changed.

He does love audiobooks and has a lot of windshield time, but $180 per year for a book subscription can now be optimized by free trials and other free means. You just have to be willing to think outside the book box.

Since he has sworn off eating out for lunch and stopping at gas stations for drinks and snacks, which means he’s looking at another $1,000 or more in their family pocket.

Just the cuts mentioned here saved the family just over $2,700 a year.

The total out of pocket cost to start up the mobile business was about $35,000. He had taken debt to make this happen (remember, that was Pre-ChooseFI) however, feels that with the cutting of expenses and increase of take-home money coming in, he can pay it off within a year or two.

Figuring Out The Business

In Wyoming, outdoor events happen all year long. It is at these different kinds of opportunities that they learn what is a good use of time and resources and what is not. Donuts were a hit at three snowmobile races, a winter carnival, and the “music in the park” events. “Hangout” events of all kinds is where the real money is made. The whole town comes out and there is no charge to be there; a win-win. Multi-day beer festivals have been very worthwhile, which will help pay off the loan they took out on the trailer.

Another approach was to put the trailer on a corner lot of a business. Hardwiring it for utilities allowed them to leave it there all summer, which was nice in theory. However, there just wasn’t much bang. The business was slow and they felt enslaved to the trailer. It took a lot more time to make even close to the money that the events brought in. Tommy felt that this “failure” still had its own reward because he and the family were learning what works and what doesn’t.

When To Pull The Plug On His Job

After running their numbers, he feels he’s four years away from quitting. The kids will be nine and eleven. Tommy and Kelly can spend those next years raising the kids and selling donuts whenever and wherever they please. When they graduate, maybe he’ll go back to a traditional job. He’s fine with knowing he’ll figure it out at that point. There will be plenty of time to get that “real job” again after the kids and this precious time with them is done.

They’ll be in their early fifties, and with the ten year Financial Independence knowledge they now possess, they’ll be FI by sixty!

The math tells Tommy that they will have several hundred thousand in his 401(k) by then and $40,000-$60,00 in savings. Kelly will be earning money along the way, too. He can also step up the advertising once they work it full-time. He can work part-time at ski hill if he wants. All of this is at a novice level, so by the time they fully launch, it will be a very efficient operation.

“We live our life, it is OUR life, we are not required to work forty years and then hopefully be able bodied enough to enjoy retirement. We’re enjoying our NOW.”

Tommy, Kelly and their kids can be found on Facebook at Dynomite Donuts.

Favorite blog: Montana Money Adventures. The very first Choose FI episode I randomly listened to featured MMA. As a family on the path to living our best life, I relate to this blog in so many ways.
Favorite article: How I got rid of 700 items in a month at mindyourmamma.com. I started decluttering as part of a bible study that sought to demonstrate the abundance we live in. We had to count our clothes, in categories: shirts, pants, etc. The grand total was astounding. We followed a plan to get rid of 30 items from each room of our house. When we eventually found FI community and decided to downsize to save money on rent, this process went into overdrive. We have since removed many hundreds of items from our home and our lives. Stuff does not make you happy.
Favorite life hack: Owning our own business to purchase and write off everything.
Biggest financial mistake: During the 2008 financial crisis, we pulled out funds from a 401K to start a business that ultimately failed.
What have you purchased over the last 12 months that has brought the most value to your life: Purchased the food concession trailer as a side hustle a few months before finding the FI community. Since finding this community, that trailer has now become our path to living our best lives.
Related Articles: 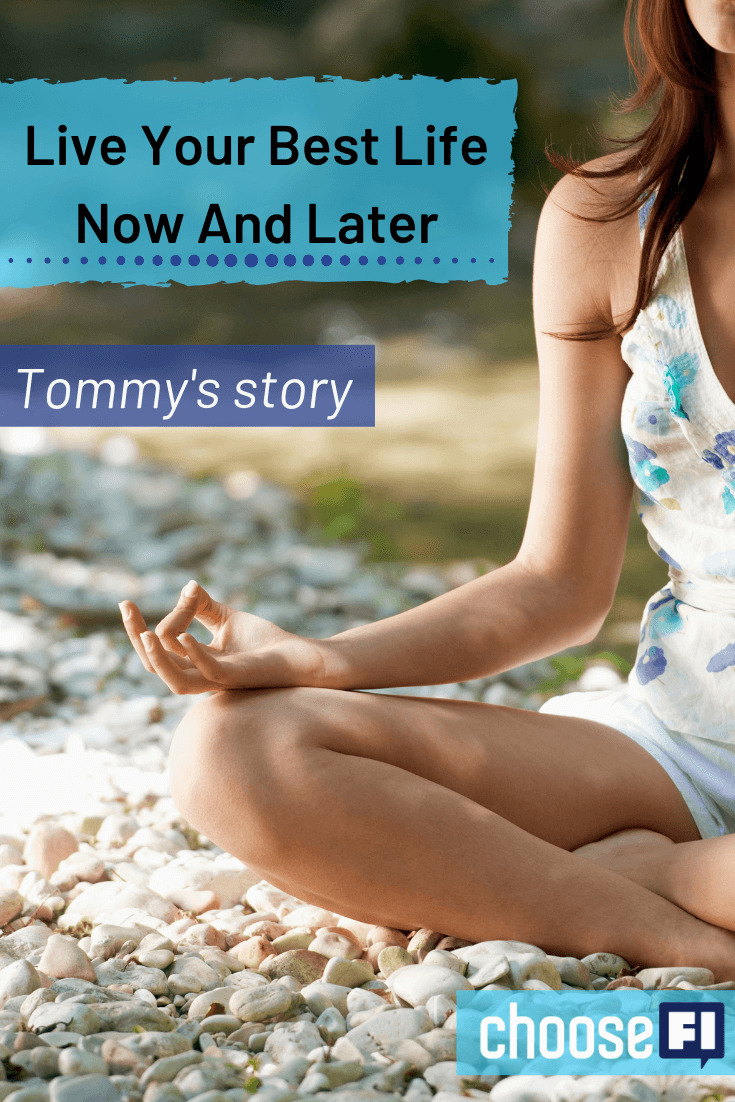 Emergency funds aren’t a new concept to having a healthy financial life. Part of being responsible with your money is keeping a certain amount in

Life Optimization
Negotiation 101: How to Negotiate Anything

Want to learn how to negotiate? Negotiation can be a scary word for a lot of people. It often evokes a feeling of challenge or