A discussion of community and market volatility.

Brad just returned from a trip to Long Island to visit family. While he was there, he was able to attend the sold-out Playing with FIRE premiere in NYC. It was a great night full of community connections.

As we always say, it’s not about us, it’s about them getting up off the couch and taking action. And I heard so many just super cool stories.

Also, Brad joined the ChooseFI Long Island local group for a meetup. As these local groups unfold, it increasingly becoming a place to find new friends from all over the world. The connections are genuine and everyone is really open with each other. Find your own local group here.

As most have seen, Andrew Luck left the NFL earlier this week. Although he took a lot of flack, it was an impressive decision. He has chosen to value his family and health over a few more glorious years in the NFL. Luck likely had to overcome the feeling of guilt for leaving. Are you staying in your own job based on a level of guilt? Many people have a lot of guilt to work through when they decide to walk away from their careers. However, you will eventually need to rationalize this feeling in order to walk away. Realizing that you have the opportunity to design your own future based on your values is critical. Specifically, Brad and Jonathan have witnessed this feeling of guilt in doctors and teachers.

The important part is really evaluate what it is you want your life to look like and don’t feel like you need to be trapped y what other people tell you that you have to do.

Find where that guilt is coming from and set it aside. Here’s a great article about Andrew Luck’s retirement.

As most have probably seen, the news is calling for a recession soon. Specifically, Peter Schiff, a prominent economist, is warning of an impending financial disaster. However, this market volatility is nothing new. The market constantly dips and rises but overwhelmingly it seems to rise over time. With that, the best option is likely to stick to your original investing plans. Make your investment plans when you are in a good frame of mind and stay the course when you are worried.

That is not advice to stick your head in the sand but advice to not make irrational choices based on setting the plan.

You do not want to set up the plan when you are emotionally affected by the market. If you are in the accumulation phase with ten to 20 years until FIRE, then consider this a sale. If the market drops, it will have time to rise again. Take advantage of that opportunity. If you are approaching drawdown with less than five years until FIRE, then you may need to consider pulling chips off the table. If you are currently in drawdown, then you need to be the most cautious because you are using the money now. Remember, this is not a get rich quick scheme, it is a get rich quick-ish plan. If you can put in the effort over a ten to 20 year timeline then the simple math will propel you towards your goals. However, as you start to develop a net worth there will be more sharks in the water. This is especially true if you are trying to make up for lost time through more complicated investing strategies. For example, a seminar with an upsell or an advanced leverage real estate deal is likely not the way to go.

There just is no secret. You can focus on the simple math and what you can control. Make sure to really research any place that you are taking information from. Remember, if someone had a billion-dollar idea, then why would they sell it to you for $297? Keep your eyes open!

Control what you control. Focus on simple math.

A recent survey of our audience showed that most think that FIRE is possible within 10 years. At the end of 10 years, most of our community will be beyond FI and can share what they are doing. However, Ed is already beyond FI. His insights from last week’s episode were key. Ed has reached FI but has not retired. In fact, he said he never will. That’s because he believes in what he is doing and acts on a mission. He believes that FI is the project of his life. The goal is to share that with as many people as possible because he cares. What do you care about? What is something that lights you up? Imagine having time to devote to that thing once you are FI.

If you are going to work it better be something that’s not toxic for you.

For Ed, the ChooseFI International Foundation lights him up. He wants to get FI into the hands of as many people as possible. He has taken his amazing skill set of organization and marshaling resources to fuel his passion. As the executive director of the foundation, he is making a big difference around the world. If you have a similar skill set, then take advantage of that! You could apply that to a company and turn yourself into their most valuable employee.

Let’s hear what the community has to say.

A few weeks ago, we put out a call to the community about how people are hacking college. Ryan wrote in to tell us about several small items that helped him. The co-op proved to be most useful. He worked 6 months at a time at a company full-time intermittently throughout college. Although it took him five years to graduate, he earned between $60,000 and $70,000 over the course of these co-ops. Some of that money funded school expenses, but some went into a Roth IRA. He graduated in 2009 when companies weren’t hiring but Ryan landed a job. Without his work experience from the co-op it is likely he wouldn’t have landed a job. Now he lives in Denver and plans to work until his mid-30s.

Shout Out To Julie

Julie posted that she and her husband had been fixing up their rented home in exchange for a discount on rent. However, they planned to move out soon into their own place. When they let their landlord know, he was reluctant to see them go. So, they asked for $300 off their rent if they promised to stay for 2 years. And he said YES! A great reminder that everything is truly negotiable.

Shout Out To Kaitlyn

HA! Since I PAID OFF my oldest, largest credit card, the company decided to “reward me for handling my credit so well” by increasing my credit limit! #nottodaysatan#aintgonnafallforthat#thanksforthinkingofmethough#funny

Two new local groups were formed this week. Welcome to Humbolt County, CA and Eau Claire, WI! If you live near there be sure to join their Facebook group so you can participate! The DC local group will be joined by Brad and Jonathan on Sunday, September 8th at 10:00. We are meeting at the Washington Hilton in the Heights Courtyard. Please join us. Additional details can be found in the local group’s Facebook page. 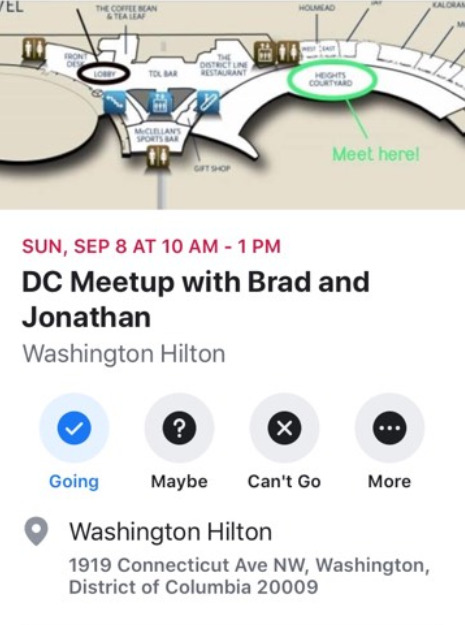