Not All Debt is Created Equal

If you’re planning how to pay off your debt, you’ve probably come across the debt snowball and debt avalanche. These are methodologies of paying off debt. Each method has its benefits and drawbacks.

While the method you choose can make a small difference, the reality is it won’t make a huge difference except in a small percentage of cases.

We’ll cover how each method works and how to tell if choosing one method or the other matters in your specific situation. More importantly, we’ll show why getting started is the most important thing of all.

A how-to conversation about strategies for tackling consumer debt, a review of Monday’s episode with Bonnie Traux, and a few updates about the ChooseFI community.

How of FI: Hacking Debt

Most debt is a hurdle to financial independence to be avoided if possible, or paid down ASAP.  Here are a few tips to getting back

You’ve worked hard for months, possibly years, to become debt-free. For some of you, this may mean you’ve paid off your student loans and credit

How the debt snowball works

Next, make the minimum payment on every single debt. Take any remaining money you want to use toward paying off your debt, which is called your debt snowball, and apply it to the first debt on the list. Which will be the debt with the smallest remaining balance.

The reason many people swear the debt snowball is the best method to pay off debt is the fact that you’ll get quick wins. Your smallest balance will be the easiest debt to pay off quickly. This will give you an emotional win and allow you to feel real progress while paying off debt.

The drawback is that it’s not the most efficient way to pay off your debts. We aren’t looking at interest rates, so you will likely pay slightly more in interest with this method than you would with the debt avalanche.

How the debt avalanche works

Once you have your debts listed the payoff method is the same as for the debt snowball. Pay the minimum payments on all your debts except the one with the highest interest rate. Send anything extra you have towards that balance until it is gone, then move on to the next debt.

This will technically allow you to pay off your debt the fastest since you’ll reduce the total amount of interest you’ll pay as fast as possible. For logical thinkers, the debt avalanche makes the most sense.

However, for those that need emotional wins to keep them motivated, it may not work out as well as the debt snowball.

Comparing the debt snowball and avalanche for your specific situation

Ultimately, it doesn’t matter what the experts say. You need to pick the debt pay off method that makes the most sense for you. The only way to know which method will work better for you is to run the numbers to see how big of a difference it would make to use one method over the other.

Thankfully, Vertex42.com has built a debt reduction calculator that allows you to plug in your debt information and see exactly how fast each method would allow you to pay off your debt and how much interest you’d have to pay. You can find the spreadsheet here.

Let’s say two people, Sarah and Bob, have the same exact amount of debt. Here’s a quick list of their five debts, along with the interest rate on each debt.

The total payment on all debts is $919.43 per month. Here’s what would happen if both Sarah and Bob had $1,500 per month to put toward paying off their debts. 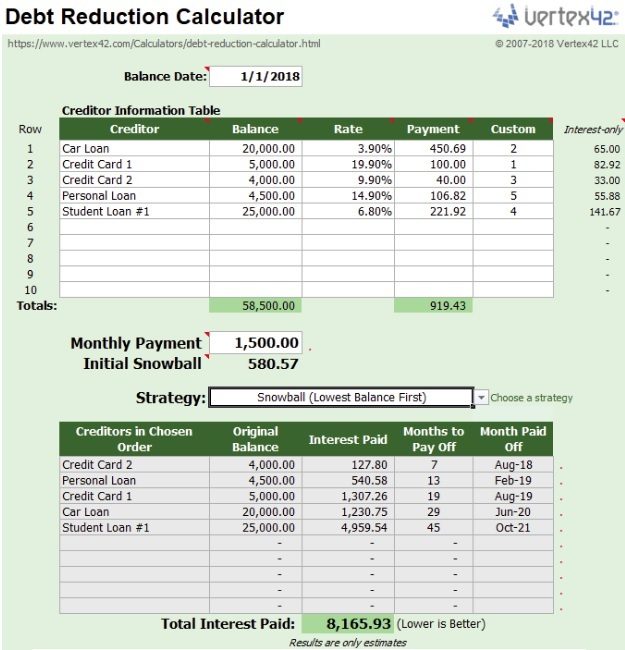 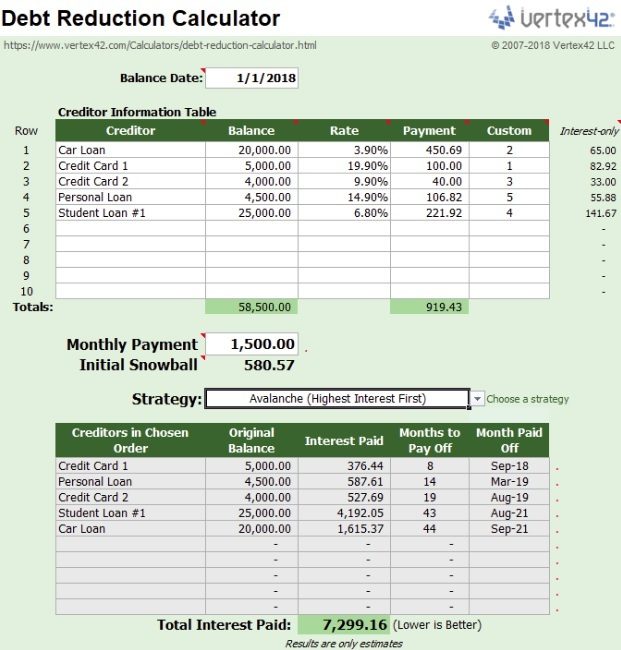 But what happens if Sarah and Bob only have $1,000 to put toward the debt? The smaller your snowball or avalanche, the larger the difference will be between the two methods.

Even though the debt snowball would result in making payments for an extra 27 months, the difference in interest paid is only $1,352.39.

Just pick a debt and start paying it off

Let’s say Sarah and Bob both read about the debt snowball and debt avalanche. They’re ready to start paying down their debt using $1,500 per month but can’t decide which method to use. Perhaps they have some analysis paralysis, or maybe they can’t agree with their spouse on the best method.

Even if Bob had chosen the less optimal method of the debt snowball immediately, he still would have paid $2,154.34 less in interest than he did by waiting a year to make a decision.

This shows you how important it is to get started when it comes to paying off your debt. Don’t let the decision of using the debt snowball or debt avalanche delay your debt pay off journey. Just pick the one you feel will work best for you and get started today.